close
The Blind Side is not the first film to use sports to make a point about racism. Will audiences respond?

Fighting Racism on the Field 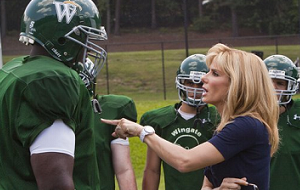 The Blind Side seems like a lock to steal at least a little attention away from The Twilight Saga: New Moon this weekend.

The film stars Sandra Bullock as a frosty-haired Christian woman who takes in a homeless black teen and helps him to become a football sensation.

It’s all based on a true story, the remarkable life of NFL lineman Michael Oher and the racism Bullock’s character faced along the way for her choices.

But this isn’t the first time a true sports story reflecting the country’s racist elements has hit the Cineplex. And the two previous films of its kind bombed at the box office.

Neither film proved Oscar calibre, but each told a dramatically relevant story that combined a social conscious storyline with crackling sports footage. And The Express delivered one of the better performances of Dennis Quaid’s lengthy career.

Yet neither film could draw a crowd.

“It is not clear to me if, in general, the American public has tired of the sort of racial barrier tales that all of these stories point to,” says Christopher Malone, associate professor of political science at Pace University.

The professor says The Blind Side does offer a few distinctions over those past films.

The aforementioned films were set during a time when racism was palpable in the U.S. The Blind Side offers a more contemporary story, not one that played out during “the waning days of segregation,” Malone says.

“So The Blind Side isn’t a ‘breaking the barriers’ story in the same vein that those others were,” he says.

Another distinction between the two, he notes, is that while Side deals with racial matters there are other core elements at play.

“There is a ‘bootstraps’ element to ‘The Blind Side,‘ combined with a sort of compassionate ‘kindness of strangers’ a la Tennessee Williams that those other movies didn’t have,” he says. “You’re not dealing with laws and legalized racism to the same extent in The Blind Side.”

The election of the first black president, Barack Obama, adds an interesting wrinkle to this subject given its release now and not a year or two ago, he says.

“Certainly it was naïve to think that Obama would usher in a post-racial world. On the other hand, there is a ‘been there, done that’ quality to all of these films that might seem quaint now that the ultimate American racial barrier has fallen—a black president,” he says. “In a way, last year’s election was about as good as you can get if you’re looking for a story that breaks a racial divide.”

But that’s a biopic for another day.