close
FEATURE: The legendary actor seems to have better luck with comedies as of late. Will Old Dogs continue the trend? 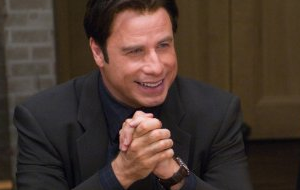 The Saturday Night Fever star’s career has been repeatedly pronounced dead, only to rise again with hits like Pulp Fiction, Look Who’s Talking and, most recently, Wild Hogs.

The older stars play middle aged men who suddenly have to act like fathers when one of them learns he sired twins seven-plus years ago.

It’s not unfamiliar terrain for a comedy veteran like Travolta, who looks more than comfortable mugging for laughs on screen. But why don’t audiences seem interested in him playing tougher, more sophisticated roles these days?

The list of Travolta misses is getting longer, and they rarely involve him trying to tickle our funny bones. Well, Battlefield Earth is an unintentional exception. Consider The Taking of Pelham 1 2 3, Ladder 49, Domestic Disturbance, The Punisher and Swordfish —all posted underwhelming numbers.

What about the mystery inherent in Travota’s Saturday Night Fever performance? Or the edge he let director Quentin Tarantino shape into something extraordinary in Pulp Fiction ? Even the comedy Get Shorty showed an element of danger in Travolta’s performance, the sense that his character could snap at any moment. That beaming smile could easily turn ugly.

Travolta fused his handsome visage with a predatory appeal, a combination which helped his star ascend in the first place.

So why don’t audiences want him to tap into those emotions on screen?

Jenelle Riley, National Film and TV Editor with Back Stage magazine, blames the actor’s film choices for his roller coaster of a career.

“I think audiences are interested in John Travolta as long as he makes ’good’ movies. He seems to have a better sense for comedies that will work … than action flicks,” she says.

One way to reconnect with his inner action hero is to re-team with Asian film director John Wood. The actor-director combinations of the past yielded Broken Arrow and Face/Off, two of the bigger hits from the actor’s 1990s resume.

“People loved them. Maybe a re-teaming with Woo is in order?” she asks.

That might work, but part of the problem might come from the actor himself. Those who saw Be Cool, in which he reprised his Get Shorty character Chili Palmer, witnessed a different man in action.

The effortless cool and swagger were gone, replaced by smaller performance from an actor who seemed to have forgotten what made him appealing in the first place.

He looked like he was pressing in Pelham playing the villain, as if he didn't trust the character to appear menacing enough just by his actions.

Maybe if Old Dogs proves successful we’ll see Travolta’s swagger come back next time, no matter the type of project.