close
We caught up with idiosyncratic writer-director Jared Hess to discuss his new film, Gentlemen Broncos. 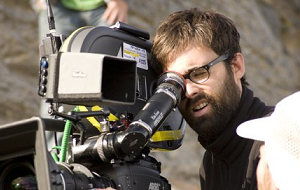 Jared Hess might be indie film's Lord of the Geeks, but in person, the soft-spoken, spectacled and bearded writer-director is surprisingly unassuming for a man who got both freaks and jocks dancing like Napoleon Dynamite. After the tots heard 'round the world and squeezing Jack Black into spandex for Nacho Libre, Hess is back with Gentlemen Broncos, a curious flick about a sci-fi fan named Benjamin (Michael Angarano) who agonizes when his debut novel is poached by a diva local filmmaker and his idol Ronald Chevalier (Jemaine Clement). Hess talks to B OXOFFICE about the line between exploiting and endorsing geekdom, and why he truly—no, really—loves his characters.

One thing this film does is remind an audience of what happens between when a writer writes his words and then a director—or in this case, a director and Jemaine Clement—picks them up. Do you think you'll ever write something you won't direct yourself?

Probably not. I mean maybe that will happen down the road, but yeah, I feel like it’s the little fetus that I wouldn’t give away once I’ve given birth to it, you know what I mean?

How does the writing process go with you and your wife? I mean, you actually use the word 'fetus.'

It’s great. We’ve written all the three films that we’ve done together—I don’t know if I’d get any work done without her, man. I’m pretty lazy and really ADD, so I don’t know how much I’d accomplish. But our comedic sensibility is totally in line with one another. By the time that we’re done writing a script, we’re not quite sure who’s responsible for what because we’ve written it together. It’s not like I write for a day or two and then hand it over to her. We do it together. We have to get a babysitter now—we have two young kids—and we’ll go to the office and write, and go to lunch, and come back and try and get two pages done before we have to go relieve our babysitter.

How do you cast your extras?

Gosh, we just try and find the real people in the neighborhood. Usually the kids in our neighborhood where we live. We try and get them, especially for this film, to come be a part. We have a lot of family, too, between my family and Jerusha’s family. If you listen to the DVD commentary for the film, it’s mostly like ‘There’s Uncle Hal in the background clapping, there’s Aunt Patience…’ It ends up being quite a family affair.

Your films remind me of the commercial director Joe Sedelmaier from the '80s—he did 'Where’s the beef?'

He cast real people. Totally. And that’s really important to me. For a lot of the bit parts in the film, our local casting director in Salt Lake would go out to the grocery store with a video camera and put people on tape. We found a lot of people that we used in the film that way, which was a lot of fun.

That’s exactly how he did it. He’d be walking down the street and just corner someone. What do you want people to be talking about like over dinner after they leave Gentlemen Broncos ?

Boy, that’s a good question. You know, all of our films, the characters that we populate our films with, are usually based on someone that we know or grew up with—or a family member. It’s funny how Napoleon resonated with people. I think a lot of people identified with this underdog guy—even if they weren’t like him growing up, they knew someone like him, or had a brother that was like him. Especially with this film, there’s a lot of different layers with the science fiction aspect and the celebration of that world, which is something that I love and have always loved. You’ve got all these very different eccentric people that all are going through some kind of a creative process. They have a big creative ambition that they’re trying to achieve. Whether it’s the mom and her modest nightgown designs, or Benjamin and his Yeast Lords book, or Chevalier and all of his weird ideas or Lonnie Donaho making his home movies. I hope that aside from it being a comedy, that people can be inspired to chase their dreams, as bizarre as they may be.

Critics of your work feel like you don’t like your characters or the world that you’ve put them in. How do you respond to that, or what are people missing?

It’s funny. A lot of people that didn’t like Napoleon thought that we had contempt for characters and were being condescending to them. But the truth is, I moved around a lot growing up and was always having to adapt to a new school and make new friends. I always felt like an outsider, as did my wife Jerusha. That’s kind of a theme in our films. But, when we were making Napoleon, and even in the case of this film, people that are forgotten because maybe they don’t achieve a level of success that society deems great, I feel like their stories are equally important, however ridiculous their ambitions may be. For me, the kid that you would just dismiss at school, or in life or at work—I want to hear their stories, too. I always felt growing up that I wanted someone to care about me, and I want to see those people's stories and give them a home in cinema. So I have a lot of affection for these characters. Yes, we are laughing at them, but they achieve their dreams in the end. I’d like a happy ending.

Your films show the normal people—the alphas—as being the truly weird ones. I feel like the only other major filmmaker as focused on that is Neil LaBute, and you guys both came out of Brigham Young University. What's going on there?

I don’t know? I’ve never met Neil LaBute. He did go to BYU—I think he was in the theater department. I was in high school when he made his first movie. That’s a weird coincidence. I know people who went to school with him, but I’m not that familiar with his work. I guess I should be up on the BYU alumni film.

Work up that BYU pride. Mormon filmmakers aren’t that large of a group—people seem to really try to find your personal beliefs in your work, more so than they do for Christian filmmakers.

Yeah. With anybody that has any kind of faith, that’s going to affect their work in some way or another. We haven’t tried to preach our faith in our films by any means—they're all comedies. But, I think the cultural aspects of it, where our films have taken place, the culture of that area is a big part of the films. I think people want to see their faith in our work, but it’s really more of a cultural thing as opposed to a religious thing.

Napoleon Dynamite is a huge guilty pleasure flick for people—what are yours?

Oh boy. Like Big Trouble in Little China, Willow. The nostalgic films of my childhood are the ones that I love a lot. Film, I’ve always loved it as an escape more than anything.

I was in Mexico two weeks ago, and next to the standard Luche Libre costumes being sold on the street, they were selling costumes of Jack Black as Nacho Libre.

That’s wild. Yeah, I had some family that recently went on a cruise to Mexico and they said you could buy the mask and the capes and little dolls and piñatas and stuff.

Culture is folding in on itself.

Totally. But Luche Libre man, that’s been in Mexico forever. It’s their thing; they call it their national sport, more so than soccer. Depending on who you talk to.

What’s next for you guys?

Jerusha, she’s written a romantic comedy without me. I feel like I’ve been holding her back all these years. She’s super talented. And I’ve got some other things that I’m working on that are probably too early to talk about, but we’re staying busy.