close
We take a look at the exciting new efforts that are most likely to post the best box office numbers. 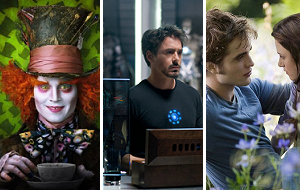 2009 will end up with a staggering domestic haul of nearly $10.6 billion in addition to setting a decent amount of international records. The year spawned dozens of incredibly successful films, some of which came from established properties while others were sleeper hits that surprised industry professionals.

Expecting 2010 to top 2009 at this point is unrealistic, but there are plenty of strong films scheduled to open.

Valentine's Day (Warner Bros., 2.12.10): An impressive ensemble cast means that moviegoers of all ages will show up for Garry Marshall's romantic comedy. Taylor Lautner and Taylor Swift will appeal to teenagers, Jessica Biel and Ashton Kutcher will entice twentysomethings, Julia Roberts and Jamie Foxx will grab patrons in their 30s and 40s and Shirley MacClaine and Hector Elizondo will bring in the over-60 crowd.

Alice in Wonderland (Disney, 3.5.10): Johnny Depp and Tim Burton team up once again for a film that promises to take full advantage of 3D capabilities. As along as Burton doesn't deliver a product that is overly strange, AiW could have a broad reach.

Date Night (20th Century Fox, 4.9.10): The combination of Tina Fey and Steve Carell is bound to deliver some fireworks at the box office. Expect this one to post summer-level numbers in the spring.

Iron Man 2 (Paramount, 5.7.10): 2008's Iron Man opened $102.1 million, and there's no reason to think that the sequel won't blow that total away. There are some rumblings that Iron Man 2 could challenge the opening weekend record of $158 million that still belongs to The Dark Knight.

Shrek Forever After (Paramount, 5.21.10): The Shrek franchise has raked in around $2.130 billion worldwide. Moviegoers will be more than happy to line up for another installment.

Sex and the City 2 (Warner Bros., 5.28.10): Carrie Bradshaw and Co. are back for another round of gossip, love affairs and shopping. As long as the quality level stays the same, then this one has a decent shot at topping the $152.6 million domestic haul of its predecessor.

The A-Team (20th Century Fox, 6.11.10): Director Joe Carnahan has a knack for staging compelling, stylish action scenes (see Smokin' Aces and Narc) and it doesn't hurt that the film stars Bradley Cooper at the height of his popularity. Even though Mr. T won't be making a cameo appearance, that's not reason for concern. The lack of a William Shatner cameo didn't exactly hurt 2009's Star Trek.

Toy Story 3 (Disney, 6.18.10): The recent release of the first two installments in 3D helped drum up interest in the third installment. Disney/Pixar ruled the animation game during the past decade, so it's fitting that they are returning to a tried-and-true property in order to kick off the new one.

The Twilight Saga: Eclipse (Summit, 6.30.10): Considering that New Moon pleased fans around the world, the third installment in the series should add a healthy amount of "Twihards" to the fold. That means The Dark Knight's opening weekend record could be in jeopardy since New Moon's opening fell just shy of $143 million. New Moon's worldwide haul is $680 million and counting, so it's not hard to imagine the third installment coming close to the $1 billion mark.

The Last Airbender (Paramount, 7.2.10): M. Night Shyamalan takes a break from his own material in order to tackle a property with tons of built-in fans. A lucrative new franchise is likely.

Meet the Fockers Sequel (Universal, 7.30.10): The first two installments combined for a $730 million worldwide haul. There's always humor to be mined from awkward family situations, and fans of the series will be eager for another round of Ben Stiller and Robert De Niro clashing.

Megamind (Paramount, 11.5.10): Can a voice cast that features Brad Pitt, Will Ferrell and Tina Fey result in anything less than a massive hit? We're betting not.

Due Date (Warner Bros., 11.5.10): Robert Downey Jr. joins The Hangover helmer Todd Phillips and Hangover star Zack Galifianakis for a new comedy. All three men are at the top of their games, which means the resulting project should do some serious damage at the box office.

Harry Potter and the Deathly Hallows (Part 1) (Warner Bros., 11.19.10): The multi-billion dollar franchise is coming to an end. Warner Bros. will be sad to see it go, and die-hard fans may soak it up as much as they possibly can in theaters.