close
Can Sarah Jessica Parker translate her recent success with the Sex and the City movie into more box office clout? 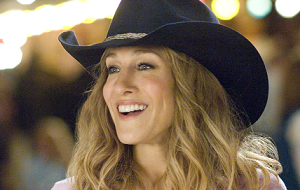 Most actors go through their entire careers without finding a role that makes an imprint on popular culture.

If the actress never made another movie she'd be forever known as Carrie Bradshaw, the flustered singleton at the heart of Sex and the City.

But while that 2008 rom-com smash has a sequel under way, will Parker's film career consist of Carrie Bradshaw-and little else?

Actors may find iconic roles to be a blessing, but they can also be a curse when it's time to portray different personas.

Parker attempts to prove her Sex and the City film career isn't a fluke this weekend with Did You Hear About the Morgans? a romantic comedy co-starring Hugh Grant. The leads play a bickering couple forced into the witness protection program.

And while Parker has enjoyed modest success in the past with films like Failure to Launch, none of her film roles have proven as memorable as when she steps into Carrie's signature Manolo Blahniks.

"I think the idea is kind of Carrie Bradshaw trapped in the sticks, which is I guess a pretty wise move on her part, to not veer too far from what people know her for," Riley says. "It's also smart for her to pair herself with a viable leading man who can take some of the blame if the film flops."

Riley thinks Parker is choosing her projects wisely, and while she didn't care for Launch it hit the rom-com sweet spot with audiences.

It also helps actresses like Parker that switching from television to film-and back-is more accepted than in the past.

Christopher Presley, Director of Professional Development for The Actors Studio Drama School at Pace University, says Harry Potter star Daniel Radcliffe may have pushed matters too far when trying to break free from his signature role.

The young actor's skin-baring role in the Broadway play Equus became less about him stretching as a performer and more about "Harry Potter gets naked," says Presley, an award-winning Broadway and West End director and producer.

Actors in iconic roles often break free by retaining some of what made them successful in the first place.

Harrison Ford could have forever been known as Han Solo from Star Wars, but he played the adventurous Indiana Jones shortly thereafter, a role that kept some of Han's heroism intact but added a dash of romance.

The latter set him up for future romantic features like Witness, Presleys says.

Presley isn't worried about Parker failing in her post-Carrie roles.

"She has stage charm, it's not teachable," he says. "She has the technique behind her."

And Morgan casts her as a woman struggling with romance, which should be enough of a link to Carrie Bradshaw to help audiences appreciate her new role.

"It's having the chops to be able to do other things ... and respecting the audience that adores you," he says.