close
If Nine catches on at the box office, it could lead to a renewed interest in Federico Fellini's 8½. 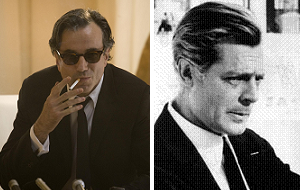 With his new musical Nine now playing in New York and Los Angeles, one wonders what audience recognition means to director Rob Marshall. Audiences turned out in droves to see his adaptation of Maureen Dallas Watkins' play Chicago, which went on to gross $170.6 million domestically and score a whopping 13 Academy Award nominations (6 wins) in 2002, but nobody showed for Marshall's next film, a big-screen version of Arthur Golden's book Memoirs of a Geisha, which only earned $57 million domestically against its $85 million dollar budget. Whether or not name recognition played a part in the two films' popularity is hard to say, but the success or failure of Nine may shed some light on the subject. This time, the film is not only an adaptation of a previous work, a play by Mario Fratti, but also a grand homage to Federico Fellini's Oscar-winning 1963 masterpiece 8½, which the average modern filmgoer may not have heard of.

On one hand, it seems like modern audiences, more now than ever before, have the entirety of film history at their fingertips. DVD is the most popular home video format in history, allowing viewers to see digitally remastered presentations of films that never arrived on VHS or Laserdisc, and custom lines like The Criterion Collection even create elaborate supplemental packages to help viewers understand the importance of the film both in the time it was released and its place in film history. Additionally, the internet is a valuable resource, with fans taking entries from books like Steven Jay Schneider's popular "1001 Movies You Must See Before You Die" and creating YouTube tributes to each of the entries, and numerous film sites dedicated to promoting an understanding of classic film.

"Certainly, you can watch anything today, whereas you would have certainly had to make an effort to watch an older film until the advent of television and in the '60s with revival houses," says John O'Leary, assistant professor of communication at Villanova University in Pennsylvania. However, O'Leary is quick to point out a bit of a catch: "Film history was then and is now driven by the star system. In the '40's, you would know what a Clark Gable film is, and today, you would know what a Bruce Willis action film is."

Indeed, it's hard to imagine the "average" American moviegoer switching between black-and-white Italian cinema without any famous faces and something like Transformers: Revenge of the Fallen. "Sadly, only film buffs buy the DVDs of foreign films, and the films never play in theaters in more than a few major US cities," says Wheeler Winston Dixon, editor of the Quarterly Review of Film and Video and an English professor at the University of Nebraska.

"Back in the seventies, foreign films were the rage, especially on campus. Bergman, Bunuel, Kurosawa, Truffaut, Satyajit Ray Ray, and Fellini productions were all part of the shared film experience and parlance because their movies were regularly interspersed with the American products. Those international filmmakers comprised the new wave that hit the stagnant Hollywood pool," adds Gerry Molyneaux, PhD, a film professor at LaSalle University of Philadelphia. "Today, less than two percent of the films shown in this country are foreign, so de facto audience awareness of film history suffers from the lack of exposure. Even on campus, film societies, where foreign films were a staple, have succumbed to "on demand" screenings in the dorm rooms. Consequently, graduates leave college unexposed to foreign film fare."

What's more, Fellini's film is often abstract and dreamlike, which may prove baffling to those who do seek it out, although O'Leary has faith audiences can take it. "I think audiences would enjoy 8½," he states. "In general, movies like that, for a mainstream audience, it's hard to get them in a seat to watch a black-and-white film, with subtitles that's that old, but in my experience, since I run a film series that does feature foreign films and art films, that if you can get someone to sit in the dark and watch your film like that, then they really enjoy it."

The most relevant piece of the puzzle, of course, is how useful an understanding of 8½ will actually be. Quentin Tarantino is also a master of homage, even naming his massively successful Inglourious Basterds after an Enzo G. Castellari war film of the same name (albeit with proper spelling), yet understanding of Tarantino's nods to Castellari's movie, the 1980's remake of Cat People, actress Edwige Fenech and more aren't necessary ingredients in enjoying the experience. Nine's references, on the other hand, are more direct, meaning that background knowledge will undoubtedly hold a greater value.

Even though it has grabbed a handful of Golden Globe, SAG and Broadcast Film Critics Association nominations, reviews have not been kind to Nine. It's obvious that being compared to a revered masterpiece is a heavy burden to bear.

"Rob Marshall is no Federico Fellini," says Dixon. "One can't expect the depth, or talent, or the incisive penetration that he brought to 8½." Yet, perhaps, the best scenario of all is a mass introduction to the movie, courtesy of Marshall's film. "Though rightfully admired by critics and historians, and a commercial success in its era, [the film is] almost never screened today, and for the most part, pop culture has passed it by," Dixon continues. "It's a brilliant film, and while Nine may be a commercial or even critical hit with mainstream audiences, the [best thing] it can accomplish is to bring 8½ back into the public eye." O'Leary agrees. "If it's a big hit, then I think there could be a resurgence in interest in 8½, and even in Fellini in general." He pauses. "Of course, if it's not so big, then maybe not so much."