close
We sat down with Saoirse Ronan, the star of Peter Jackson's adaptation of The Lovely Bones. 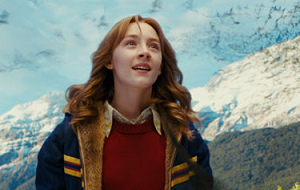 Irish actress Saoirse Ronan made her first film when she was 13 years old. Then she made her second, Atonement, 2007's dark period drama about a child who falsely-but adamantly-accuses James McAvoy, the suitor of older sister Keira Knightly, of rape. Though Vanessa Redgrave played the girl as guilt-stricken woman, it was the teenage newcomer who captured attention and Best Supporting Actress nominations from the Academy, BAFTA and the Golden Globes. Catapulted into the spotlight as a young actress of uncanny intelligence and perception, Ronan is a talent to watch-and millions will be watching as she tackles her biggest role yet as the doomed girl who suffers-and delights-in watching her loved ones work through her murder and unearth moments of pain and many of surprising beauty.

Were 14-year-old girls different in the '70s than they are today?

I suppose they weren't aware of as many things back then. Kids know a lot more now about stuff that they shouldn't, really. And I thought that was nice; that immature, naïve feeling was very refreshing. And unfortunately, that was part of the reason why Susie ends up going down into the underground room: she just didn't expect him to be one of those people.

There was so much tension in that scene-it was surprising because we know what happens, even people who haven't read the book. How did you make that scene feel so immediate as though we still couldn't believe what was predetermined?

I think it actually makes it more intense when everybody knows what's going to happen. As soon as she makes the decision to go down there, everyone's wishing for her to go home. Please go home. You can feel that everyone wants her to do that. And when she's down there, it's like everyone's waiting for him to grab her and it drags on for quite a while-forever. It just makes it more intense. Your heart is beating. But I thought it was a great way to go about it. You never actually see the murder, which makes it stronger.

I heard that you and Stanley Tucci became good friends on the set. Tell me about that balance.

I felt that whoever was going to play Susie and Mr. Harvey needed to get on well with each other. Luckily for both me and Stanley, we do get on well and became good friends and were comfortable with each other. I didn't really get to know Stanley before shooting the film-we got to know each other on the cornfield scene when he lures her to her murder, that was our first day. That was the first scene we shot together, so right away we just dove into it intensely. But it was great because Stanley and I seem to have the same working technique. We don't completely become the character; we're not method actors. We were able to joke around between takes. When we did the underground scene, it was quite intense. I was worried about Stanley because it was tough for him as a person-as a normal person, as a father, as somebody who's just a good guy-to have to become someone like that must have been difficult for him, but he did it so well and that was very frightening. So we would make sure we were both okay between takes. It was great that we were so open with each other.

What's your policy as an actress on adaptations? Do you read the books before you tackle the character, or do you live with the script?

I waited until after the movie to read the book because I thought I was too young. I was 13 at the time and I heard that the book-especially the first chapter-was a tough read and not something that I needed to go through in order to portray Susie. Because the script was so well and beautifully written, it was very easy just to follow that.

Was there anything about Susie or her life that surprised you after getting to know her from the film?

There were lots of differences between the two. Some of the characters don't have as much time in the film and some things have been taken out. That's all necessary because otherwise you'd have a six hour movie. But Susie didn't seem different to me, not really.

What I like about the projects you've picked is you aren't shoe-horned into childish roles that are too innocent-you play girls who are fully realized humans, not just kids.

That's always in my mind, what you just said. I don't want to do something that's been done one-hundred times over. I don't want to play the typical kid girl role because quite a lot of people have done that already. I just always want to do something different, and really for me, it's about a well-written script, a good director and a great character that when I read her, I immediately feel like I have to do this, I have to play this girl. I don't really have a plan on what's going to happen or what kind of character I'm looking out for. It's just something that really comes to you.

When you're a younger actress with promise, it seems that people are always trying to find your parallel.

I know! I remember somebody said I was the next Dakota Fanning. How can I be the next Dakota Fanning when I started at 13 and she was a lot younger? Plus, we're the same age! It doesn't make sense. I've been very flattered with the people I've been compared to. Most actors are quite different anyway. To be compared to people like Jodie Foster or Meryl Streep or Cate Blanchett is wonderful because they're all great, great actresses and very strong women. But you are your own person and I do think people know that.

There's a lot of weight on your shoulders in those scenes where you're running through the In-Between-you're silently conveying so many emotions. Because the effects were added later, what did you physically see on the set while shooting those scenes and what were you imagining?

On the days we shot those, the walls of Heaven, if you like, were usually blue screen, and in the In-Between, the gazebo was mostly always there. There were trees, there was grass-it was really only everything around that that wasn't there. It was great because Pete would actually talk to me between takes and describe what was going on-it was easy to react to that, and we'd play music as well that would reflect the mood of the scene. Lots of different things would help. We also did some art scenes in New Zealand. We had the interior of the Salmon house and different things like that. Although the basic outline of each scene was in the script and Pete had told me what was going to happen, I had no idea that it was going to look that like that. I can't remember now what I pictured in my head, but it wasn't what I expected it to be. I didn't know what to expect when I saw the finished film-I was blown away, it was beautiful.

Your father shot your homemade audition tape. Could you describe it to me?

He did. They sent over a couple scenes from the script-I hadn't read the whole thing yet. One scene was the Ray Singh [Susie's first crush, played by Reece Ritchie in the finished film] and it was happy and bubbly. It was a nice, light scene. The other one was an earlier version of Susie saying that she wants Mr. Harvey dead. It was a really, really emotional scene. Very dark. And Susie had changed from the way she is on Earth to the way she is in the In-Between. We had a nice contrast. I got my dog in the shot and we went out to the garden and I just talked a little bit about me and I said hi to the guys who were going to be watching it. We sent it off to Pete in New Zealand and a few weeks later we got word that they wanted me to play Susie.

What was that like, the day you got the news that you were going to star in Peter Jackson's next film?

At first, it took a few minutes to sink in. My agent told me. I was sitting on the couch and when I heard it, I was like [sits stiff and still and breathes]. 'Oh. Okay. Really?' I had never been cast in anything that big before-and still haven't-and it was huge. And I was thrilled and excited and happy. It was so huge to me that it took a few minutes to realize that not only was I going to be in a Peter Jackson movie-I was playing the lead in a Peter Jackson movie. And Steven Spielberg was producing it, and there were these people from The Lord of the Rings, people I had looked up to and admired their work. It was amazing. And I couldn't tell anyone for two weeks. I was working on another film and the silence was awful. It was torture. It was wonderful.

The Lovely Bones is currently playing at select locations.

Make sure to check out our interview with Peter Jackson here.