close
Avatar and The Princess and the Frog will help 2009's domestic haul reach another milestone before Christmas. 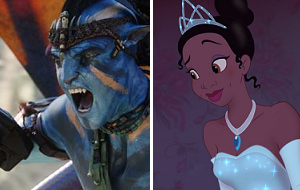 Now that 2009's domestic cume has passed 2008's total haul with time to spare, there's another milestone on the horizon.

The domestic box office has been flirting with the $10 billion plateau over the past two years, and now it's going to become a reality. 2008's haul from January 1 to December 31 equaled $9.626 billion, while 2007 raked in $9.624 billion during the same period. 2008 was given a huge boost by the stellar performance of The Dark Knight. 2007 was led by Spider-Man 3.

With $402.1 million in the bank, Transformers: Revenge of the Fallen is this year's best domestic earner. Add to that the stellar performances of Harry Potter and the Half-Blood Prince, UP, Star Trek and The Twilight Saga: New Moon and it should come as no surprise that the $10 billion mark is now a lock.

Yet for all the sure things that were released this year, 2009 may be remembered most for its surprise hits. Films such as The Hangover, Taken, Paul Blart: Mall Cop, Paranormal Activity, District 9 and The Blind Side totally defied the expectations of industry professionals and box office prognosticators alike.

2009 certainly doesn't mark the first time that Americans have taken refuge from a harsh economy by going to the movies. As a result, tons of unique films have been able to prosper.

"Exhibitors have done a great job of responding to the economic difficulty through loyalty and incentive programs, and by keeping the cost of going to the movies relatively low compared with any other form of entertainment," says John Singh, a spokesperson for Flixster. "Studios have begun to really embrace the fact that moviegoers are online and that the way people discover and share movies is changing."

20th Century Fox's Avatar and Disney's The Princess and the Frog will play a big role in helping 2009 reach $10 billion. The year's total currently sits at an impressive $9.668 billion. Since both films are highly anticipated, it’s not unreasonable to expect that 2009’s domestic box office could reach $10 billion during the December 18-20 weekend, which will see the release of Avatar after years of speculation and hype. Yet even if 2009 doesn't reach the plateau during Avatar 's opening weekend, the year's total will definitely make it there before Christmas Day.

B OXOFFICE.com is currently predicting a $28 million weekend for The Princess and the Frog when it expands to a wide release this coming Friday. As for Avatar, we're expecting a $62 million debut. But if 2009 has taught us anything, it's that expectations are easily shattered.

“We’re seeing brisk advance ticket sales for both Avatar and the Disney Princess movie,” says Fandango spokesperson Harry Medved. “In both cases, these films appeal to underserved moviegoing audiences that have been anticipating these films for a long time.”

“Ever since James Cameron unveiled 25 minutes of 3D footage at Comic-Con, fans have been clamoring to see the rest of the movie," adds Medved. "After all, it’s been ages since we’ve seen an original piece of adult sci-fi storytelling not based on a franchise, TV show or other property. Younger kids have been anticipating the arrival of the new Disney princess since the teasers appeared last year—it’s been a long time since Disney presented a new princess movie—let alone a traditional Disney hand-drawn film for animation fans.”

Both The Princess and the Frog and Avatar are gambles for their respective studios. The Princess and the Frog represents a return to traditional animation after years of computer-animated dominance. As for Avatar, much attention has been paid to its bloated budget. Whatever the actual figure may be, James Cameron's latest film has a long way to go before becoming profitable.

"No matter how [ Avatar and Princess and the Frog ] do relative to expectations, they’ll definitely contribute to a very tasty year-end result for the box office," says Singh.

Even after $10 billion is achieved, there's still room to grow before the New Year. Alvin and the Chipmunks debuts on December 23, while Christmas Day will bring with it the likes of It's Complicated and Sherlock Holmes. When all is said and done, 2009 should be able to surpass $10 billion by a comfortable margin.