close
The November box office set a new record for the month, but fell short when adjusting for ticket price inflation. 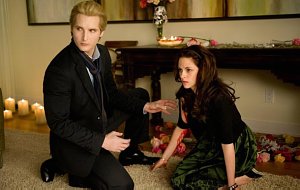 November 2002 was similar to November 2009, in that four releases from November 2002 cleared the $100 million mark; those films being Harry Potter and the Chamber of Secrets, Die Another Day, The Santa Clause 2 and 8 Mile. Like November 2009, November 2002 also saw a relatively weak line-up of Thanksgiving releases in Treasure Planet, Eight Crazy Nights, Solaris and They.

November of 2009 got off to a lukewarm start the weekend of November 6th with Disney's A Christmas Carol. The Robert Zemeckis directed motion-capture film starring Jim Carrey opened below expectations with a three-day start of $30.05 million. However, thanks to strong word of mouth and moviegoers in the mood for a holiday themed film, A Christmas Carol held up quite well throughout the month much like The Polar Express did back in November of 2004.

November 6th also saw the debuts of Overture's The Men Who Stare at Goats, Universal's The Fourth Kind and Warner's The Box. Both The Men Who Stare at Goats and The Fourth Kind debuted in line with their modest expectations before fading away rather quickly in the weeks ahead, while The Box was dead on arrival. The weekend's second strongest release was eventually Lionsgate's Precious: Based on the Novel "Push" by Sapphire. The low-budget Oscar hopeful for Best Picture delivered very strong grosses throughout the month in limited release and will remain a factor at the box office in December.

The following weekend saw the unleashing of Sony's 2012, the latest big-budget disaster film from director Roland Emmerich. 2012 opened a bit higher than pre-release expectations with an opening weekend of $65.24 million. In the initial days after its release it looked as though 2012 could be in store for a lengthy run for its genre, but before long the film began to lose momentum. Nevertheless, 2012 was still the second highest grossing film during the month of November and performed much stronger internationally where Emmerich's films traditionally perform better.

The month's two biggest box office stories both were unleashed on November 20th, one of which everyone saw coming and the other being one that nobody saw coming. The first, Summit's highly anticipated fantasy sequel The Twilight Saga: New Moon, blew past its loft pre-release expectations with a debut of $142.84 million. That was the largest opening weekend of the year, the largest ever opening weekend in November and the third largest opening weekend of all-time (behind The Dark Knight and Spider Man-3). Although it didn't set a new opening weekend record, New Moon did set new Midnight and opening day records as fans of the series rushed out in massive numbers during the film's initial hours. New Moon is displaying signs of being extremely front-loaded so far, but with that said, the film's 11-day start of $233.33 million has already outpaced the $192.77 million total gross of last year's Twilight by a very comfortable margin.

The story that no one saw coming was arguably the year's biggest surprise hit to date, Warner's The Blind Side starring Sandra Bullock. The football drama based on the story of NFL player Michael Oher more than doubled the opening weekend expectations that most had for it with a three-day start of $34.12 million. But defying the odds one time wasn't enough for the film, as it grossed an unexpectedly strong $40.11 million in its second weekend of release. The Blind Side should continue to hold up well during December and will eventually become the second highest grossing release of this November. Both New Moon and The Blind Side are especially notable in that both films are generating blockbuster-level grosses without carrying blockbuster-level production budgets.

Given the break-out success of The Blind Side, it wasn't a huge surprise that this year's Thanksgiving line-up debuted below expectations (which were already relatively low for a Thanksgiving weekend to begin with). Both Disney's Old Dogs and Fox's Fantastic Mr. Fox opened below expectations with respective five-day starts of $24.23 million and $9.42 million. Warner's Ninja Assassin grossed $21.19 million in its first five days, which was more in line with expectations. All three films will likely fade away by mid-December.

For the month of November, the top ten films were as follows:

Tags: s A Christmas Carol, The Blind Side, Michael Jackson, The Twilight Saga: New Moon, 2012, Disneys This Is It, Precious: Based on the Novel Push by Sapphire, The Men Who Stare at Goats, Planet 51, Paranormal Activity, Old Dogs
Print