close
Peter Jackson discusses his adaptation of The Lovely Bones and the influence The Partridge Family had on it.

Return of the King 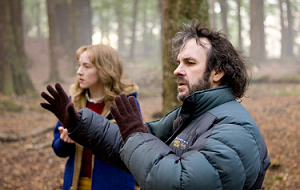 After the astounding success of The Lord of the Rings trilogy, director and screenwriter Peter Jackson first thought big— King Kong big—and then surprised the industry by selecting a pedigreed best-seller about a murdered teenaged girl for his next project. But Alice Seybold's novel is only for the ambitious: the dead child, Susie Salmon, lives on in her own in In-Between land, an imagined landscape so wild and gorgeous it could only be dreamed up by a man used to filming the fantastic. (And Jackson's earlier, small drama Heavenly Creatures, starring a young Kate Winslet three years before Titanic, proved him to be the rare director who understood both tech wizardry and teenage emotions.) B OXOFFICE sat down with Jackson to talk about his tips for adapting words to the screen—especially when that screen has to take an audience to the world after death.

Tell me about the first time you sat down and read The Lovely Bones.

I first read it in 2002. All the films that I make, I co-write them with Philippa Boyens—she's my partner. We'd been working on the post-production for The Two Towers, the second Lord of the Rings movie, and Philippa read it just as a book to read. It had just come out and there were some interesting reviews. She handed it on to Fran [Walsh, Jackson's wife, co-writer and producer], who read it, and Fran handed it to me. So the three of us had read the book and we started to talk about the idea of adapting it because it seemed like a challenge—it felt like a difficult book to adapt. It defied genres to some degree. It was about topics that on one level, you'd never want to make a film about: the murder of a 14-year-old girl. But on the other level, it was about the afterlife and confirming that there was actually no death. That's strangely comforting, in a way. And it was about the process of overcoming grief, partly helped because Susie continues to live in the afterlife. All these aspects were just fascinating, and not the sort of topics that films usually deal with. It had an overall uplifting quality, which I liked. It didn't come to us right away. We made an inquiry about it and found that the rights had already gone and another film was being made. And then a couple of years went by and we got a phone call saying that the rights were now available again—the other film was no longer happening. It felt like fate had steered the project back to us again and we jumped onboard.

Your adaptation made an interesting choice: it took a book, but instead of clinging to the words with narration, it went wordless. Instead, you put in long silent stretches that still captured the tone. We felt her voice instead of hearing her voice.

I don't believe that you can ever adapt a book into a film in the sense of making a carbon copy. You just can't do it. Film is such a potent medium in that it has sound effects, music, actors performing dialogue, closeups of their faces and eyes. There's design and location—these things which come at your senses off the screen when a novel deals with a different set of senses: imagination and the words that create pictures in your mind. It's a very, very different experience. And so there's no such thing as adapting a book perfectly. So therefore, you're just really selecting parts of the book that really affect you. If you gave The Lovely Bones to 20 filmmakers, you'd get 20 different films. It's a very personal book and you ultimately have to decide what to include. If you included every character and every subplot, it'd be five or six hours long. What appealed to us was the story and the sense that Susie when she's in her In-Between—what she calls the area between Heaven and Earth—where she finds herself trapped for much of the movie, trapped by the man who killed her, she's fearful, she can't move forward. That world, to us, is almost like a psychological state. It's a dreamlike reality. And it also meant that we were able to shoot the film very visually without including the dialogue that the book has to include and make it a film that affected your emotions.

Could this film have been made before we had the visual technology to show her world?

A version of the film could have been made. Certainly, it would have been different. There've been a lot of movies made over the years before computers came around and some of them are very visual and very imaginative. I'm sure people could have done a version of the story. But the fact that we were delving into the subconscious and imagination of this 14-year-old character Susie Salmon, we really liked the possibilities that that gave us, and we certainly used all the technical tools were had at our disposal to bring that world to life.

When the New York Times reviewed Alice Seybold's novel, it called the tone 'a high wire act.' Did you feel that pressure?

I'm not familiar with the review, but I can understand why they'd say that. We did feel the same thing with the film. The movie doesn't fall into a nice packaged genre in the way that modern cinema seems to like its films to be packaged. This is a fantasy film, a crime film, a drama—it isn't neat and tidy because I think neat and tidy is boring. What appealed to me about The Lovely Bones is that it dealt with multiple themes in contrasting ways. You were filming scenes on Earth with Susie's parents trying to deal with her death in a completely different style than scenes with Susie and her subconscious in the afterlife. And then you're also dealing with the guy who kills her, Mr. Harvey, in a completely different way, because I was trying to shoot these scenes with the particular tone and character and mood appropriate to each piece. I love that mixture. A 'high wire act'—I don't disagree, but that's the appeal.

A lot of storytellers—filmmakers, especially—make childhood too innocent. Your films, especially here and in Heavenly Creatures, capture how being young is without being too pure or too corrupt.

I agree with you. The Lovely Bones was helped by the fact that Fran and I—we've been together for 25 years—have a teenage daughter. We really made the film for her. Sure, we made it for ourselves, too—that's what you have to do when you have all these decisions to make and you're following your instincts—but we wanted our daughter to enjoy this movie. It's about a teenage girl, and we wanted the audience to be able to be teenage girls. We didn't want to exclude girls by making it R-rated or putting horrible things in there that we would never want our daughter to see. We wanted to speak to young adults but not in a saccharine way, not in a way that condescends. I think parents and adults underestimate the maturity and intelligence of young people. They don't realize that when you're 13, 14, 15 years old, you are thinking like an adult. Obviously your life experience isn't complete by any stretch—there's a lot of things that you don't know—but you're able to discern complex ideas and we wanted the film to speak to that age. In a positive way: it confirms the value of love, it confirms the importance of life, that you must enjoy and savor every moment and the people you love around you.

I heard you drew some inspiration for Susie's In-Between from episodes of The Partridge Family ?

We wanted the In-Between to reflect her life experience. She's a 14-year-old in 1973, so we looked to pop culture. We're pretty much the same age as Susie. We were 13, 14 years old in 1973 just like her. It's the world of dreams and she's taking into this world everything that she is and everything that she's experienced. When she's happy and carefree, we found colors to represent that and we certainly used that Partridge Family style, the colors and wardrobe, to make this early '70s fun imagery for what she's experiencing. But then equally when she's sad or upset or missing her family, the colors darken and become something very different. We wanted to create a changing, shifting landscape depending on her emotions, but certainly that type of poppy Partridge Family stuff is a factor in the design of the world.

You use dollhouses as a visual metaphor.

In dream analysis, houses often represent people. We did a lot of research and apparently—I'm no expert—if you dream a vivid dream about a house, it's often representing a person. We use that several times in the movie, actually. For instance, when Susie is imagining this solitary, scary house in the middle of her In-Between, she's dreading it, and that house represents Mr. Harvey. It's only when she opens that door and goes in there that her subconscious enters his subconscious. She sees his victims, his previous victims, these images that only he has in his mind. And he takes a charm bracelet of hers as a souvenir. He throws most of it away as it's evidence, but he keeps a little charm which is a tiny house. And again, that was a metaphor for him hanging on to Susie. The fear that she feels for him in one of the things that keeps her in the In-Between. So we used the idea that houses are people, and the concept that Mr. Harvey, this monstrous figure, looming over these dollhouses that he carves, was a great metaphor for showing his power over these young people. He's ultimately a child-killer. He kills young people. And we really liked the imagery and the idea of him being this monstrous ogre looming over these houses which in one way represents the fastidious detail he puts in his obsession with young people and the way that he exercises his control over them.

And I have to ask: News on The Adventures of Tintin and The Hobbit ?

The Hobbit is two movies, as you might know. We're doing The Hobbit as two different films. We've written one script and we're partly through the second, so we're due to deliver the second script to the studio round about Christmas. Guillermo del Toro is directing The Hobbit. And Tintin, which I'm producing and Steven Spielberg is directing, we're doing it as a motion-capture film. That part is finished and we're into two years of post-production to do the rendering with Jamie Bell playing Tintin, Andy Serkis playing Captain Haddock and Daniel Craig as Red Rackham.