close
Clint Eastwood's Invictus will now try to secure a place among the most beloved sports films of all time.

Sports at the Movies 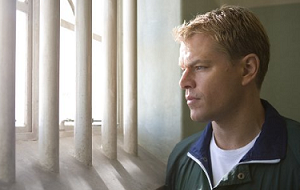 Some of the most beloved movies in popular culture deal with the games people play.

Yet for every iconic sports movie there are dozens that fall by the waste side. The Best of Times. Wildcats. The Express. The Benchwarmers.

So does Invictus, which tells how the South African rugby team shocked the world in 1995, have a ghost of a chance at the box office?

It's not wise to ever count Eastwood out. Who would have thought Gran Torino, his film about an old Korean War veteran barking at punks to get off his lawn would be one of 2009's surprise smashes?

Washington Times sports columnist and reporter Dan Daly says rugby is a "tough sell in the U.S. market, no matter how well the movie is done."

Films like Major League, Slap Shot and Happy Gilmore all thrived in large part because they made us laugh in between the sports material, he says.

Even The Blind Side, the current runaway hit, keeps the mood light to balance the more sobering social issues. And the film includes plenty of scenes with a comical youngster, always a good, easy laugh getter.

"I'm sure that helps its word-of-mouth," he says.

Invictus has some impressive star power behind it, from Clint Eastwood ensconced in the director's chair to Matt Damon as the captain of the South African rugby team.

"And if Matt Damon plays rugby like Jason Bourne, it could be fun to watch," he says.

Sometimes Hollywood cranks out a classic sports film, be it Raging Bull or Chariots of Fire, and the result is Oscar gold.

"Hollywood seems less inclined to make those, though," he says.

What frustrates Daly is when the industry strays too far from the facts when tackling a true life sports saga.

"Cinderella Man was guilty of that when it misrepresented the character of Max Baer, who really was a good guy by all accounts," he says. "The Hurricane pulled the same stunt when made it look like Hurricane Carter got robbed of a decision against Joey Giardello when in fact Giardello defeated him decisively."

Even the justly lauded Chariots of Fire fudged some facts, he says.

The film industry loves to bend the truth in its storytelling, and since sports often involve long delays, injuries and other less than dramatic elements, creative license is often wisely applied.

"By and large, I think Hollywood feels like it's on safer ground dealing with sports fictionally, it not fantastically," he says. "And it probably is."