close
Can The Hurt Locker break the unwritten rule that the Best Picture Oscar must go to a financially successful film? 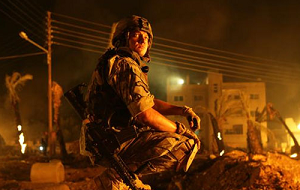 The Hurt Locker has received an overwhelming amount of critical support over the last couple of days.

Yet the most coveted prize in the movie business has never gone to a film that failed to achieve success at the box office. Unfortunately, The Hurt Locker grossed only $12.7 million during its domestic theatrical run.

Crash is this decade's lowest grossing Best Picture winner with $54.6 million. Technically, Annie Hall has the lowest domestic gross of any Best Picture winner since 1970 with $38.3 million in 1977, but that equals around $124 million when adjusted for inflation.

Does this mean that The Hurt Locker can't possibly win the big prize?

Hollywood-Elsewhere.com's Jeffrey Wells thinks that the film may make history in another way.

"The Hurt Locker might win the Best Picture Oscar but the $12 million thing means it probably won't. The big payoff will be Kathryn Bigelow winning Best Director-the first woman to win in this category," says Wells.

Bigelow won the Best Director prize from the NY, LA, SF and Boston critics and she was also nominated for a Golden Globe and by the BFCA. In addition to being the Best Director favorite, a lot of attention will be paid to the fact that Bigelow is competing against her ex-husband, James Cameron. That kind of story will keep her in the news at a time when publicity is crucial.

If The Hurt Locker wants to become the Best Picture winner with the lowest theatrical gross since 1970 it will have to fight off a bunch of worthy competitors.

Up in the Air, Precious: Based on the Novel "Push" by Sapphire and Avatar are the other heavy favorites.

Up in the Air opened at only 15 locations on December 4, and it was able to grab a healthy $1.181 million. This past weekend, Paramount increased the film's run to 72 locations and it tacked on another $2.4 million. To put that into perspective, Slumdog Millionaire was able to bring in $1.4 million from 78 locations during its fourth weekend of release.

Up in the Air goes wide on Christmas Day, and it will have to compete with Sherlock Holmes, It's Complicated and Nine for the attention of adult moviegoers. If Up in the Air is swallowed up by the rush of Christmas releases, then it too could also fall short of the kind of financial success that is expected of Best Picture winners.

Precious already has a healthy $38.4 million in the bank even though it's still playing at only 664 locations. The Lionsgate release is certainly a tough sell, and the Academy may be hesitant to honor such an unrelentingly bleak project. Precious will most likely to bring home a Best Supporting Actress prize for Mo'Nique even if it falls short of winning Best Picture.

As for Avatar, the 20th Century Fox release has been met with some glowing early reviews, and Hollywood may feel the need to acknowledge James Cameron's huge risk in a major way. Regardless, a win for Best Special Effects seems to be a lock at this point.

Even if it doesn't win Best Picture, The Hurt Locker still has plenty of time to find a bigger audience. Summit is releasing it on DVD and Blu-ray on January 12. Maybe this time more movie fans will pay attention.