close
Armored follows in the footsteps of other gritty 2009 releases such as Taken and Law Abiding Citizen.

The Return of B-action Films 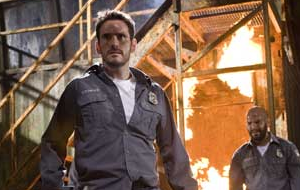 In the 1980's and early 90's, B-action thrillers were a dime a dozen, but with genre vets like Steven Seagal and Jean-Claude Van Damme beginning to flounder at the box office, the action movie switched gears in 1999 towards wire-fu in movies like The Matrix and Crouching Tiger, Hidden Dragon. Now, with the same style of film failing to grab audiences (i.e. Ninja Assassin ), the B-thriller is making a comeback, with one major difference: it's attracting Oscar-caliber talent.

In January, 20th Century Fox released Pierre Morel's Taken, which starred Liam Neeson as a retired Secret Service agent who travels to Paris looking to rescue his missing daughter. Even though Taken had already been released in France (where the movie was written and filmed) and despite a late January release date (a month normally considered a dumping ground for mediocre leftovers), it was a surprise success in America, grossing $145 million and inspiring talk of a sequel (currently being written).

Even the critics that disliked the film singled out Neeson's performance as one of the film's high points, suggesting that the actor's reputation brought something extra to the movie. Whether audiences agreed with said consensus is hard to tell, but Neeson was only the beginning. Since then, the year has seen the release of The Taking of Pelham 1 2 3, a remake starring Denzel Washington and John Travolta, Law Abiding Citizen, with Oscar winner Jamie Foxx, and the disaster epic 2012, which not only featured John Cusack in the lead role but also includes Danny Glover, Woody Harrelson and Thandie Newton in supporting roles.

This weekend sees the release of Armored, about a group of armored car drivers plotting a heist of their own cargo, and when the plot is the only draw—no offense to writer James V. Simpson or director Nimród Antal—it's not hard to imagine the film (or any of the other movies listed above) going direct-to-DVD. However, Armored, attracted the talents of Laurence Fishburne and Matt Dillon, two guys that, once again, seem slightly out of place in a film like this but whose marquee value is more than enough to afford the film a full release.

One major factor in the increased appeal of B-action films might be attributable to the rise of the superhero film. In the early-to-mid 90's, when rights to a Spider-Man film were tied up in rights issues, studios made a few half-hearted attempts at bringing comic books to life, including the dreadful Captain America (1990) and The Fantastic Four (1994), but the results were so poor that the former never recieved a US theatrical release, and the latter never received a release at all (only viewable today thanks to the internet and bootlegged DVDs). Ten years after Captain America, the movie industry was ready to try again, offering up an X-Men film bolstered by the talents of Patrick Stewart, Ian McKellen and Usual Suspects director Bryan Singer, to the tune of $157.2 million domestically (just short of $210 million when adjusted for inflation). Now we have pictures like Thor on the docket with Kenneth Branagh behind the camera, dissolving any remaining fears that action movies—comic book or otherwise—is "lesser" material.

Films like Armored also potentially represent the most straightforward kind of escapism. In recent years, heroes like James Bond and Jason Bourne have been weighed down with pesky elements like pathos and emotions, mulling over each bullet and uppercut. In a film like Taken, Neeson's character Bryan Mills elects for the more classic "shoot first and ask questions later" method, pounding on each and every thug that comes his way for a slick 90 or so minutes. Not interested in the mythology or backstory that comes with a Star Trek or a Dark Knight ? A film like Armored or Taken brings everything to the table.

Even though Armored won't be as big a hit as Taken, the B-movie seems to be back in a big way. Not only has Neeson signed onto 2010's big-screen revival of The A-Team (and Clash of the Titans ), but the year kicks off with Edge of Darkness, which features both the cinematic return of Mel Gibson and a sneakily Taken -esque plot in which ex-cop Gibson looks to avenge the death of his daughter. Plus, those B-action stars like Seagal and Stallone are cooking up their own formula: the ensemble picture, packing multiple familiar faces into Stallone's film The Expendables and the Robert Rodriguez-Ethan Manquis directed Machete. To take a page out of Seagal's book, despite advances in technology, waves of new directors and cinematic voices, and the march of time, the B-action flick remains hard to kill.