close
FEATURE: Can Kristen Bell reach leading lady status now that she has a starring role in When in Rome?

A Star in the Making? 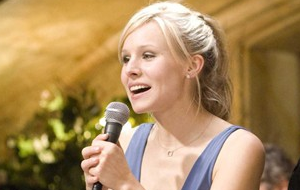 Kristen Bell wants to be the next Sally Field-not the next Sarah Michelle Gellar.

The small screen star of Veronica Mars is back in theaters this weekend with When in Rome, a romantic comedy co-starring Josh Duhamel.

The petite Bell is certainly attractive enough to play rom-com heroines. And she acquitted herself nicely as the selfish title character in Forgetting Sarah Marshall.

But can this television star carry a motion picture on her slim shoulders?

Fandango.com editor Chuck Walton thinks so, citing the combination of her first forays in film and her impressive television fan base.

"Kristen Bell could be one of our next prime time, rom-com queens," Walton says. She proved she can handle both comedic and heartfelt moments in Marshall and Couples Retreat. And she wisely chose projects in which she was part of a strong ensemble, rather than using her new fame for an instant starring vehicle."

Bell also burnished her hip quotient with a part in the cult favorite Fanboys as well as her narration chores on Gossip Girl.

And she is a cutup on the late night circuit, proving a fine mettle for the likes of David Letterman and Craig Ferguson.

"At age 29, Bell seems ready to expand her fan base beyond the younger demographic," he says.

The actress brings a blend of "sweetness and sass" that could be the final ingredients for a protracted film career.

"While she hasn't crossed over yet as a household name, she just needs that one breakthrough movie to bring in audiences," he says. The attractive star "brings a down-to-earth appeal to all of her characters, and a sharp wit. [Those are] two essential traits for any romantic comedy queen."

In Rome, Bell plays a woman being pursued by a gaggle of men including Danny De Vito, Dax Shepard, Will Arnett and Duhamel. It's her task to sort through her suitors to find true love.

The Dailies co-host says the actress's late night appearances could be playing a part in how the movie going public perceives her.

"When I watch those shows and I see someone whose likable and lets their guard down, it shows you a very real side to them," he says. Audiences become disenchanted with stars who seem pretentious in those situations.

Another effective tool at Bell's disposal is refusing to take her beauty too seriously. In Rome she isn't always smooth on her feet. That clumsiness can make her more vulnerable-and therefore attractive-to new and existing fans of her work.

Even if Bell secures a space in future romantic comedies, she could be setting herself up for a potential conflict.

If she tries something more dramatic-and fails-her career could falter, he says. Yet if she spends the next few years cranking out frothy comedies some may question her acting chops.

"She has to look at what range she has as an actress," he says.