close
Michael Cera tries to expand his reach with Youth in Revolt by showing fans a new, darker side. 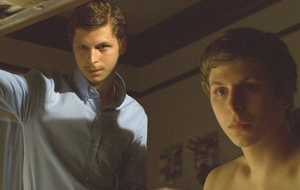 Chances are, everyone's got a memory of being young and awkward buried somewhere in their subconscious, and actor Michael Cera has turned many of these ungraceful, foot-in-the-mouth moments into his calling card in comedies like Superbad and the increasingly popular cult TV show Arrested Development. In Hollywood, however, the first thing that comes with success is backlash, and the actor's roles in Nick and Norah's Infinite Playlist and the stone-age flop Year One were similar enough to instill a sense of monotony to Cera's work. At first, Youth in Revolt might look like more of the same, but perhaps Cera's found the perfect role to subvert expectations.

In Youth, Cera plays Nick Twisp, who reads like one of his trademark roles: a sharply sarcastic but somewhat insecure dork who pines for Sheeni Saunders (newcomer Portia Doubleday), a girl he meets in a trailer park. Such a story would be little different than Superbad or Nick and Norah, until Sheeni rejects Nick and Nick is forced to come up with a better strategy. What he comes up with is a mustachioed alter ego named Francois Dillinger (also Cera), who wears sunglasses all the time, is standoffish towards Nick's divorcing parents, and brings out the risk-taking, dangerous side of Nick in an attempt to sweep Sheeni off her feet.

In general, being a movie star presents its own challenges, primarily in the way the audience sees the actor. Most actors, especially comedians, will refine one or two personas and stick with them, delivering variations on their core style in every movie. These days, however, when success pushes actors to do more work as soon as possible (Hangover and Youth in Revolt co-star Zach Galifianakis, for instance, is slated to appear in seven upcoming movies), the audience can get burned out on said personality very quickly, resulting in box office disaster. 2009's most potent example of this is Will Ferrell's Land of the Lost, which essentially repeats the same "blowhard goes from riches to rags to riches" formula as the actor's highly-popular Anchorman or Talladega Nights, but only grossed a dismal $49.3 million domestically against a $100 million budget.

Before the release of Superbad, Cera expressed a desire in interviews to play older roles, and even contemplated a shift away from acting when Nick and Norah was about to hit theaters; it's likely that most of the other screenplays that pass across his desk offer little in the way of diversity (closer inspection of his resume shows that his characters are more delivered the same as opposed to actually similar, but the range provided by the scripts is still extremely limited). The actor has even infamously played coy on the subject of returning for an Arrested Development movie-although it sounds like he is willing to do it-likely in no small part because he's afraid the character would be another way for Hollywood to pigeonhole him. What's clever about Cera's Revolt character(s) is that the film will not only draw in his existing fans, but hopefully open the door for them to see him in a new light.

Youth in Revolt was originally slated to open on October 30th, but in the wake of The Weinstein Company's financial woes, the release was shifted to this Friday. Whether the studio's marketing of the film is enough to get audiences' attention amidst the Avatar madness hard to gauge, but following the box office disappointment of Nine, it's hard to imagine the struggling studio isn't banking a few hopes on the movie. The film's R-rating might scare away some of the actor's more youthful fans, but perhaps the presence of Galifanakis and the solid buzz surrounding the movie will snatch up a slice of Superbad's audience. It's a new year and a new decade, and Michael Cera is ready to start a new chapter in his career.