close
We caught up with Crazy Heart writer/director Scott Cooper to discuss working with Jeff Bridges. 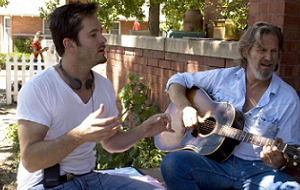 First-time writer/director Scott Cooper had to wait a year before his leading man, Jeff Bridges, agreed to star in his feature Crazy Heart.

Then the hard part began-telling the screen veteran what to do.

Their collaboration clearly bore fruit, since the Oscar buzz for Bridges' performance as a drunk country crooner is almost deafening.

"I didn't want to drop the ball," Cooper says of Bridges, who he calls a "living legend." "I felt a big sense of responsibility to create something we all would be proud of."

Cooper, an actor by trade, directed Bridges "very delicately," he says. But his instincts as an actor helped him transition to the director's chair.

"I always felt like actors don't like to be overly directed. They like a very relaxed set. It allows them to take risks and discover, search and push their ability to the edge. If I can create that world, I'll get the performances I need," he says.

Crazy Heart tells the story of Bad Blake (Bridges), a broke, boozed up country western singer trying to rescue his career with the help of a fledgling journalist and potential paramour (Maggie Gyllenhaal).

Bridges liked the script right away, Cooper reports, but the mercurial actor didn't sign on immediately. Bridges wanted to see how the film's music would fall into place. Once Grammy winner T. Bone Burnett, who oversaw the music behind O Brother, Where Art Thou? and other respected projects, came aboard, so did Bridges.

And that's a good thing, since Cooper wrote the story with Bridges in mind and, as he puts it, "there was no plan B."

The pair worked passionately on the film, making sure Bad Blake came roaring to life, warts and all.

"Every decision made about the film Jeff and I discussed ad nauseum ... the clothes, how he'd drink and smoke," Cooper says.

Bridges' openness made the working relationship between a neophyte writer/director and a screen veteran possible.

"Jeff is a better person as he is an actor, he's very welcoming. That allowed us to explore the script," Cooper says.

The Oscar winner produced Heart after reading the script-Duvall's DNA is all over the project, Cooper says.

But Cooper's directorial effort didn't come as a result of any fancy film school. He's a self taught auteur who used to watch classic 1970s films with the sound off to study how they told a tale and which lens they used for a particular shot.

"I felt like as an actor I could tell the story about behavior," he says, adding audiences won‘t see him directing any effects-heavy sequels anytime soon.

Cooper would love to direct more films, envisioning himself telling the kinds of yarns a Flannery O'Connor or William Faulkner might spin.

He just hopes he doesn't end up mirroring the career of another literary icon, To Kill a Mockingbird author Harper Lee.

"I hope you hear from me again," he says.