close
OPINION: Brendan Fraser sat down with BOXOFFICE to discuss the new release from CBS Films. 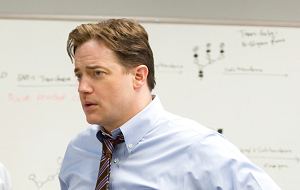 Brendan Fraser has stared down mummies, apes and even the Looney Tunes gang on the big screen.

He says his latest project felt like something new, the chance to play a dedicated father who refuses to accept the death sentence handed to his two children.

Extraordinary Measures is based on the remarkable true story of the Crowley family. Fraser plays John Crowley, the family patriarch who quit his job to work full time toward finding a cure for Pompe Disease.

The affable actor says meeting the real John Crowley reinforced the uniqueness of the project before him.

"He's one of the most principled individuals I've ever met," says Fraser of John Crowley, while adding his children were equally remarkable. "It's the story of how a family succeeds."

Whether the film itself succeeds is another story. Extraordinary Measures is the first movie from the fledgling studio CBS Films.

"I've done my job, I know that," Fraser says of his performance. He's equally optimistic about the new studio, which he says will focus on modest budgets while leveraging CBS's vast connections.

"They have a determination to say, 'We'll make movies for under $35 million,'" which doesn't get done at all [these days]," he says, adding the CBS ties mean a greater potential for word of mouth and other promotional avenues.

"With this film they do have the best of intentions of insuring it finds its audience," he says.

One potential obstacle is the subject matter, which runs perilously close to a made for Lifetime production-the dreaded "disease movie."

Co-star Harrison Ford, who helped produce the film, made sure the project avoided rampant sentimentality, Fraser says. British director Tom Vaughn (What Happens in Vegas) backed Ford up throughout the shoot.

"It's not precious," Fraser says. "It's not like, ‘this is the crying scene.' That didn't happen."

Producers Michael Shamberg and Stacey Sher, who also produced Erin Brockovich, "are no strangers to wrapping their arms around real-life events and putting a human face on it," he adds.

Fraser won't suffer if Measures should fail to find a crowd. The savvy actor has ricocheted from goofy franchise features like the Mummy trilogy to critical hits such as Gods and Monsters and Crash.

He's grateful for the Mummy films even if he understands how silly they appear on the surface.

The 2001 sequel, "is a remake of the first film. Whoops, did I say that?" he asks with a grin. "In the third film they aren't really mummies but terra cotta warriors come to life. But people wanted to see that. That's the economics of Hollywood."

"If you're able to have one of those Mummy movies it affords you the opportunity to do something more interesting," he says. "It double underscores in bold italics how lucky you are if it flies."

Fraser's ability to shift gears from a project like Measures to sillier fare like the upcoming Furry Vengeance might cost him gravitas points in some circles. But the silly grin on the actor's face says he just doesn't care.

"It's not that important to me, being appreciated," he says. "I threw away that vanity a long time ago."