close
The martial arts star is moving into the world of family films. Will audiences go with him? 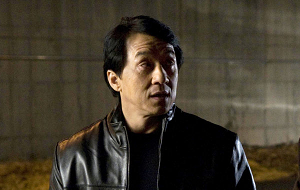 Could anyone imagine Steven Seagal yukking it up in a family friendly comedy?

It seems like quite a stretch, even if Seagal's new A&E series Lawman shows a slightly gentler side of the beefy actor.

But action icon Jackie Chan has no such qualms about acting in kiddie films.

His latest project, The Spy Next Door, is aimed directly at the pre-teen crowd. He plays a secret agent trying to retire from the business and marry his lovely neighbor (Amber Valletta). But first he must win over her three bratty children.

It's a new wrinkle in Chan's Hollywood career, and it could help extend the actor's reach as he enters his fifth decade. But will audiences of all ages accept him as a kindler, gentler action hero? Especially one who still hasn't gotten command of the English language?

The move could pay dividends for Chan. Just look at Dwayne Johnson, who proved through a series of fuzzy features like The Game Plan and Race to Witch Mountain that a big, burly actor could thrive in such a setting.

Even Vin Diesel enjoyed a serious career boost by mocking his tough guy persona in The Pacifier, one of the actor's biggest hits.

"He grows on you," Mauro says of Chan, who he‘s gotten to know from various junkets as a jovial fellow off screen.

"He's a guy who could do a lot of damage to you," Mauro says. But there's another side to Chan, one that's clearly visible in Spy.

The Asian action star is convincing as both a killing machine and a bumbling hero.

"It shows the guy isn't superhuman," he says, adding that kind of vulnerability can help him appeal to a wider demographic.

Chan is known for turning unconventional items into weapons on screen. That's something which will draw in younger audiences, he says. In Spy, Chan fends off home intruders with a variety of tools one would find in the kitchen.

Kids in the movie theater will say to themselves, "I wish I could do that," he says.

The switch to PG-rated fare probably won't reduce the wear and tear on his body, though.

"He always gets hurt no matter what he's doing [on screen]," says Mauro.

Jenelle Riley, national film and TV editor with Back Stage magazine, says all it takes for an action hero to transition into a new genre is the right vehicle.

But Riley doesn't think The Spy Next Door will do the trick for Chan.

"I think Jackie Chan could absolutely cut it as a kids film star. His work is often cartoony-in a good way," Riley says. "He just needs better material."

Mauro doesn't think Chan's career is riding on the success of The Spy Next Door. Chan could simply go back to his bread and butter no-nonsense action epics.

"I think he has a lot of years left either way [as an action hero]," Mauro says.