close
The acclaimed actor sat down with BOXOFFICE to discuss his latest film. 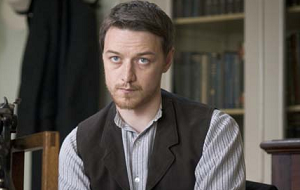 Imagine meeting your idol-a man whose devotees casually refer to as 'Christ.' As Valentin Bulgakov, newly hired secretary to Leo Tolstoy, James McAvoy is the audience's eyes as we peer into the Russian author and political theorist's last months and try to distinguish hype from loyalty. Surrounded by passionate followers and his increasingly obstinate wife Countess Sophia (Helen Mirren), Tolstoy (Christopher Plummer) wrote journals about the struggle between his duty to his countrymen and his love for his family. The Countess kept her own and unsurprisingly, they hardly match up. But it's Valentin-and the Golden Globe-nominated Scottish actor playing him-who anchors The Last Station when he moves into the Tolstoys' estate to help the writer with his work (and spy on their marriage for party boss Paul Giamatti). McAvoy talks to BOXOFFICE about today's hype machine, why it's good that Obama's feet smell and gives us the latest scoop on his cancer dramedy co-starring Seth Rogen.

The tone of The Last Station transitions from comedy to tragedy-as an actor, how did you navigate that?

You read the scene and try to define and identify the tone of it. And when appropriate, you point out the humor-and when it's not appropriate, you don't. When you're looking for pathos, you go for that. But I don't know? You just identify what each scene needs to be and you hopefully deliver it. And with the aid of a director as well. Sometimes they go, 'We want to be feeling depressed or anxious in the scene, and it's too light.' Or the opposite. It's just storytelling: you've just got to identify what you want the audience to feel and then you adjust your performance accordingly.

Your character, Valentin. It was his diary that novelist Jay Parini picked up and that fascinated him with the Tolstoys' story.

Yeah-I don't know why it was that Valentin's story that hooked him. He kept the most detailed diary-and perhaps, the least crazy. I think his journal was the least affected. Quite a lot of Tolstoy's writing, there's so much happening in his life. His focus is everywhere. Countess Sophia, she's the same. But Valentin, he's focused on them so much that he isn't tainted. I think it was easier to look at their relationship through his eyes as a reader than it was to look for the snippets of what was happening in Tolstoy's life through his journal.

It's an approach where you walk away wondering if any of them really understands the story.

You have to add everyone up to even get a guess. Even this film has a different take on the happiness of their marriage than the book that inspired it.

I don't know how happy their marriage was, really? There's a lot that we don't even hit upon here. He had so many children. She gave him, what? Thirteen?

And five of them didn't make it-only eight survived?

And he had so many more illegitimate children, as well. He had illegitimate children working in his home and on his estate. Countess Sophia just had to deal with it. Stuff like that we don't even go into, and I think while in the film, we suggest that maybe Tolstoy's a little bit unreasonable, in real life there's an argument-not necessarily my argument, but an argument you could adopt-that he behaved f-king terribly. And one of the things I like about this film is that he was a thinker. Was not just a writer; he was a thinker. And he thought great things and he imagined new ways of living. The fact that he didn't necessarily live his life that way or live by his ideals of celibacy and asceticism does not make his thoughts any less important or powerful. We shouldn't condemn a thought or an idea or a design for a way of living simply because the thinker doesn't live by it. But I think there's a hell of a lot of evidence to suggest he didn't live his life that way, which we hit upon a little bit, but not as much as we could have done.

The director, Michael Hoffman, said that he thought their story was fascinating, but it wasn't until he was many years married that he realized this was a story he could really connect to. Do you and your wife [Anne-Marie Duff, who plays Tolstoy's daughter Sasha] feel the same way?

I don't feel the same way, but he's a director. And directors are incredibly-I think-self-obsessed. [Laughs] And Tolstoy-again, I think-we portray him as being slightly self-obsessed. What Christopher Plummer does so brilliantly is he plays against the selfishness. But the actual actions of the guy are still incredibly selfish. For Michael to say that, I think that's totally something he would say, but I don't feel that in marriage there's always that battle or that sacrifice of your own hopes and dreams and passions and desires. A constant give-and-take. It's easier than that for most people-or some people, anyway. But he's a director. Directors are crazy. People think actors are the crazy ones. Directors are the crazy ones.

They have to be. They're the general in charge-the person who wants to be a general.

Totally. And they're not reluctant generals. Nobody came along saying, 'We need somebody to lead!' And they sigh and say, 'Okay.'

It's not: "Your country's under siege and the only thing you can do to help is shoot a movie!"

Valentin is incredibly nervous to meet his idol, Tolstoy. Who would make you that in awe by their presence?

I think I'm completely a victim-not a victim, but affected-by the media frenzy that surrounded Obama. And I think what he stands for and what he represents in America's evolution, and the world as well, it's really incredible and huge. But also, with the media bombardment, I think if I ever met him, I'd be like, 'Oh my god! It's actually Obama!' That's not necessarily because I think he's done anything great yet-I don't really know what he's done because I'm not from here-but his push for health care is just great. If he manages to get that, he'll be amazing. But who else would I be completely bowled over by? I'm always bad at deciding who my favorite actors, movies and songs are. Who are my heroes? I never f-king know.

The answer is always Superman. Just across the board.

I like that you mentioned Obama. There's two things we always idealize in movies: political movements and marriages. And this film captures both of them really honestly. From the outside looking in, the perspective is always off. I see in myself a Dear Leader worship when I think about Obama-would I follow him to the ends of the earth? Catching that scares me.

That's good though. I think uncompromising people are really, really attractive people. That's the great thing about Obama. He doesn't seem to compromise, even though I'm sure he is because he's a politician in the modern world-he has to compromise. He's probably already compromised on lots and lots of things, but he seems uncompromising, a definite, unmovable, statuesque figure. And that's so easy to rally to. And I think something in Tolstoy is kind of the same because he spoke with the authority of a demigod. That was so interesting to people. But how can you marry a demigod? They ask that in the film: How can you be married to Christ? But he's not Christ, he's a man, he's a very naughty boy.

When Michelle Obama said that her husband sometimes had bad breath, everyone jumped on her for trashing his golden image.

Did she say that?

During the campaign before he was elected. She said that sometimes he was 'stinky and snore-y' in Glamour Magazine and everyone freaked out: 'Why is she trying to tear him down?!'

You'd lock him in the circus.

It's a good thing he's real. In this film, it seems like Tolstoy goes back and forth between believing the hype and completely refuting the hype. It must be such a hard person to live with.

Where would you say Valentin is on that spectrum at the end?

I think he's in love with Tolstoy. I think he does love the man. For all his faults. But he also ends up loving the countess, who represents everything that Tolstoy is not. But he continued to be a Tolstoyian. He started the first Tolstoy movement in Prague and lived there for many years. He still believed. But I think he learned how to love a person and not just a movement. He was able to separate the ideas that a person has from the person themselves, and that makes the person no less valuable. I think he's empowered by the end of it, as well. What Tolstoy was talking about at the time was empowering people-invigorating and energizing and empowering each single member of the country-and by the end of this part of Valentin's life, I think he's ready to make decisions for himself. It's the disillusionment of an acolyte suddenly realizing that what his boss is teaching is: 'Don't listen to me.' It's kind of amazing, isn't it?

What's the news on I'm With Cancer?

Nicole Holofcener's not doing it. Not anymore. I love Nicole, she's fantastic-I was really excited about working with her. Nicole couldn't make the movie due to personal commitments, so she had to bow out unfortunately. Jonathan Levine who made a movie called The Wackness has taken over as of last week. Anna Kendrick is now on board to play Catherine, who is my character's psychologist. Seth Rogen is playing Seth Rogen-he's my best friend. We're going to go to Vancouver and make it next month in February for six or seven weeks. It's based on a true story about a guy who got cancer when he was 25 and spent a couple of years fighting it. He got better. And he was best friends with Seth at the time. Seth's pretty much playing himself. He's literally playing himself at that time. Although Seth was a writer for Da Ali G Show at the time and that's not in the film, but other than that, Seth was Will's best friend and Will went through cancer and Seth was with him the whole time. That's our relationship in the film. It's kind of crazy. I'm playing Will, or here Adam.

That sounds like it would be complicated for Seth. You're Will, but you're not Will...

I know. When I accepted the job, I asked, 'Am I playing Will? Or am I playing a character in this film?' He said, 'You're playing a character in this script. You're not Will; Will is not this guy. He's kind of this guy, but he's really not.' You can call it a comedy. It's at times funny. But you wouldn't call The Last Station a comedy even though at times it's funny. I think I'm With Cancer is the same. At times it's funny, but it's not funny: it's about a guy who gets cancer. It's really something that's not that hilarious.