close
FEATURE: IDP/Samuel Goldwyn Films have a solid hit on their hands in the form of To Save a Life. Will the major studios try to mimic it? 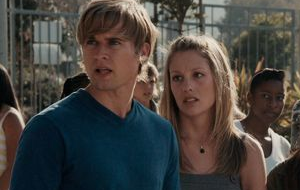 It shouldn't be a shock that yet another no-budget, faith-based feature is making hay at the box office.

Yet To Save a Life still managed to catch Hollywood by surprise.

The film, which follows a teenager who reaches out to alienated students in hopes of making their lives better, has earned nearly $2 million since opening last Friday on less than 500 screens. As word of mouth spreads quickly via facebook and Twitter, the film should pick up more followers in the weeks to come.

That's hardly Avatar money, but it likely means the film will turn a quick profit. Other faith-based films like Fireproof showed that Christian audiences will rally en masse to support a film that echoes their spiritual side.

It's something they won't get out of Sherlock Holmes or It's Complicated.

"This film has been very well advertised through Christian radio stations and many other avenues," Rudlaff says, adding the promotional effort likely outstrips those for films like Fireproof and Facing the Giants.

"Christians are just waiting to find good films like this to support," he says. What he says took him and some other Christians by surprise was the level of craft behind the film.

"For a non-Hollywood film they did a great job," he says. "Christians are not used to Christian films being made well. It's sad, but that's the truth."

He believes Hollywood power brokers also didn't expect the level of artistry behind the movie.

"I think Hollywood is surprised when they see a well made Christian Film," he says. "They think good films can only be made with lots of money and high paid actors, directors and the rest."

The recent smash The Blind Side represents a Hollywood production based on a spiritually grounded true story.

"They did allow a little bit of Christianity to shine through, that's what made it a hit, I believe," he says. The story highlighted a Christian family reaching out to someone less fortunate with glowing results.

"Most Christians just want to make a difference," he says, adding the sports element helped broaden its appeal.

Lisa Cartagena, CEO of Integrity Films and producer of the upcoming Christian film The Message, says audiences are drawn to positive themes like the ones which power To Save a Life.

"The whole movie experience [for Christian moviegoers] has turned into a quest for happy endings and a reassurance of their own faith," Cartagena says. "When you have an audience with a good feeling, they will recommend the film [to others]."

She thinks it's only a matter of time before some major studios jump on the Christian bandwagon.

"The trend is clear. Box office numbers don't lie. I'm very sure [studios] are evaluating the contents of these films to search for the right script to jump on that train," she says.

Tags: To Save a Life, Samuel Goldwyn, IDP, The Blind Side, Fireproof, Facing the Giants
Print