close
Will The Book of Eli be able to strike the right chords with moviegoers of faith, or is it too violent?

Religion at the Movies 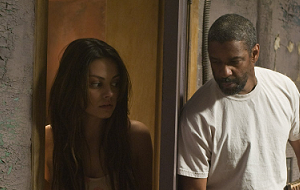 Today's Hollywood doesn't dabble in religious matters that often. But when it does, fireworks ensue.

The 2004 film The Passion of the Christ drew a firestorm of controversy for its R-rated content and its depiction of some of its Jewish characters. The Last Temptation of Christ from 1988 inspired protests for the behavior displayed by its version of Jesus. Other spiritual-themed films like Dogma (1999) and The Da Vinci Code (2006) also led to protests from religious groups.

Yet the fury surrounding those films undoubtedly helped boost their box office tallies. The old saw "any publicity is good publicity" still applies, especially to films with subject matter that doesn't involve car crashes or superheroes.

That could help the new movie from the Hughes brothers (From Hell), a film fusing a Road Warrior style vision of the future with some good, old fashioned religion.

The Book of Eli casts Denzel Washington as a nameless man heading west in a country blasted back to the stone age by war. His character is carrying a book with him, a text with clear religious connotations that the film‘s villain (Gary Oldman) wants for himself.

Faith isn't a subtext here. It's a key part of the storyline. So will that help the film's box office clout, or will the marriage of ultra-violent sequences with a faith-based plot chase away the church crowd?

Paul Asay, an associate editor with Plugged In Online, says Eli has some "powerful reverential and spiritual components" that may click with Christian audiences.

Asay, whose Focus on the Family-backed site advises readers on the spiritual and age-appropriate content of films, says his site can't endorse Eli due to its unabashed violence.

That doesn‘t mean the film won‘t inspire a devoted following. Studies suggest evangelical movie audiences don't mind screen violence even if they balk at seeing sexuality in the movies.

"Violence is not a deal killer," Asay says.

"It reflected reality," he says.

What happens in Eli may test that case. Washington's character metes out justice with a ferocity that may take some aback.

Asay says his readers have expressed curiosity about the film, even though the content is not taken specifically from the Bible or other religious texts. But the material isn't the kind to upset evangelicals, either.

"I have a hard time seeing The Book of Eli as something people would boycott," he says, in part because Washington‘s character believes so strongly in the book‘s power and goodness. "You just don't know how the religious community will react to this."

Given our media saturated age, a little more conversation about any given film is a net positive for the studio behind it.