close
INTERVIEW: Anthony Hopkins sat down with BOXOFFICE to discuss his supporting turn in Joe Johnston's The Wolfman. 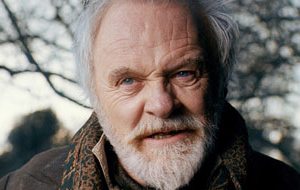 The wolfman has a love-hate relationship with two supreme forces: the moon and his father, the steel-cold Sir John Talbot. Four-time Oscar nominee Claude Rains (the steely but civilized actor best known as Captain Renault in Casablanca) originated the role in the 1941 Lon Cheney chiller and found a heart buried in the father-of-the-beast. But Anthony Hopkins is a different animal.

"Claude Rains and I have nothing in common," Hopkins tells BOXOFFICE. "I'm not dignified at all-I'm a pretty rough customer." And Hopkins' Talbot channels that aggression. Here, when son Benicio Del Toro confesses his secret, dear old dad doesn't go into denial-he encourages his child to go wild and unleash his inner monster.

"I didn't see the original movie, so I don't know how different I am from the guy," confesses Hopkins. "I don't see monster movies. I haven't been to see any monster movies. I'm not a great moviegoer."

Hopkins' John Talbot is a fighter, not a lover. He's just lost one son to a wild animal attack when his second boy, long estranged from the family, returns to ye olde England after years in America. They don't hug it out. And when son Lawrence (Benicio Del Toro) is bitten while helping his brother's grieving fiancee (Emily Blunt of The Young Victoria) hunt down the killer, Hopkins isn't offering a shoulder to cry on.

Hopkins leaves it to others to wax enthusiastically about reenergizing the Universal classic or tapping into the invigorated werewolf and vampire resurgence. "I don't find anything fascinating about werewolves," he says, adding, "I don't actually follow trends in fashions of movies-it doesn't interest me at all."

For Hopkins, the draw was simple: the chance to work with Del Toro, the Puerto Rico-born actor who has already caught up to Hopkins in Academy Awards. An added plus was director Joe Johnston, whose fantasy spectacles like Honey I Shrunk the Kids, Jumanji and Jurassic Park III have each topped $100 million at the box office.

"It's a good script," says Hopkins. "I just learned the lines and showed up."

Though Hopkins defined his A-list reputation in the '90s with dramatic character roles in Amistad, Nixon, The Remains of the Day and his most inseparable persona, The Silence of the Lambs' Hannibal Lector, increasingly he's embraced pop culture blockbusters like Alexander and Beowulf. He'll spend the early stretch of 2010 in Los Angeles and New Mexico shooting Thor, based on the Marvel Comic. (Hopkins plays Odin, the Norse god of War and Death.) But plunging into splashy CGI flicks hasn't changed Hopkins as an actor.

"I show up and do my thing and then they spend all that time doing computer specialized things. It's just like any other movie," he explains. "I leave the imagination to the editor, the director and all the special effects people. I go home at night and then when the movie's ready to show, I'll go see it." Look out for him chomping popcorn in the next row when The Wolfman tears through the multiplex in February.