close
We take a look at a handful films that could post surprising box office numbers in 2010. 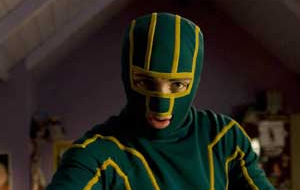 It's a daunting task to predict sleepers. After all, by definition their success comes as a surprise. A film like The Hangover may have looked like a hit, but who could have guessed it'd end 2009 as the highest-grossing R-rated comedy of all time? With this in mind, here are a few picks that might-or might not-break out in 2010.

Piranha 3D (4.16.10): Horror director Alexandre Aja's previous film, Mirrors, only managed to break even at the box office, but he'll be back in a big way with Piranha 3D, a high-tech update of the 1978 schlock favorite originally from Academy Award-winning producer Roger Corman and director Joe Dante. Thanks to a 3D teaser trailer attached to Avatar and based on the 2009 successes of My Bloody Valentine and The Final Destination, it'd be shocking if this third teaming of B-horror and 3D-so popular in the 1980's-wasn't a big, bloody hit. Of course, Aja also has the benefit of a unique cast that includes Elisabeth Shue, Dina Meyer, Ving Rhames, director Eli Roth, Christopher Lloyd and, best of all, Richard Dreyfuss, spoofing Jaws in a cameo appearance.

Kick-Ass (4.16.10): Thanks to a months-in-advance screening at Ain't It Cool News founder Harry Knowles' once-yearly 24-hour film festival (called Butt-Numb-A-Thon) and a couple of viral clips (both involving young actress Chloe Moretz as the villainous Hit Girl), director Matthew Vaughn's new film Kick-Ass was already building overhwelmingly positive buzz mid-December, with CHUD critic Devin Faraci even awarding the film a 10 out of 10. Still, the Lionsgate release-which Vaughn initially set up at Sony but financed independently when the studio gave him flak about the R-rated material- doesn't seem to be gaining much mainstream traction yet, thanks to a short greenband teaser trailer that fails to emphasize the movie's edgy content. Given Lionsgate's solid track record selling material other studios would balk at (such as the ongoing Saw franchise), it's not hard to imagine Kick-Ass being the Zombieland of 2010: a hard-R genre comedy boosted by word-of-mouth.

Predators (7.7.10): Right now, the buzz seems awfully quiet for Predators, but of course, even the title characters are known to strike when least expected. With '80s franchise nostalgia still going strong, this continuation of the hugely popular action series may prove to be a return to form after 2007's Aliens vs. Predator: Requiem turned in a mediocre performance at the box office. Thanks to Robert Rodriguez (who co-wrote the script and is serving as producer on the film, currently lensing at the director's Troublemaker Studios in Austin, TX), the series, dormant as a solo entity since 1990's Predator 2, is already looking poised for a comeback, with stars Adrien Brody and Laurence Fishburne in the lead roles. Rumors of a Schwarzenegger cameo have neither been confirmed nor denied, although there's supposedly a place in the script where he'd fit right in.

Dinner For Schmucks (7.23.10): At first, it's hard to gauge whether Dinner For Schmucks will succeed or fail without the benefit of a trailer on which to base audience reaction. On closer inspection, however, all the pieces are there. First of all, the film, based on the 1998 French comedy The Dinner Game, has a sharp plot: a bunch of rich executives invite morons to dinner with them as competition; whoever brings the most embarrassing guest wins the game. Second, it has a reliable name in the director's chair: Jay Roach, the man who helmed the hit Austin Powers trilogy and the first two Meet the Parents films. Finally, and most importantly, the movie has a killer comedic cast that includes Steve Carell and Paul Rudd, not to mention The Hangover's Zach Galifianakis. It's probably a stretch to imply that Schmucks could make Hangover money, but it's worth expecting the film to be high on people's radars once its summer release date rolls around.

jackass 3D (10.15.10): It may be a mistake to call jackass 3D a sleeper hit: the first two big-screen outings by MTV's groundbreaking(ly crass) prank show were wildly successful, grossing $79.4 and $84.2 million respectively (in unadjusted dollars) in 2002 and 2006. Still, this reunion of the entire jackass gang (including director Jeff Tremaine, who helmed the other films, and producer Spike Jonze) may be more successful than its predecessors, thanks to the added dimension of 3D. In fitting jackass fashion, Knoxville and company have already released the list of locations where the movie will be filming-Knob Lick, KY; Mianus, CT; Buttzville, NJ; Gayville, SD; Fukang, China-a list likely to gain a knowing groan from the series' fans.

The Green Hornet (12.22.10): When thinking about adapting radio serials like The Green Hornet to the big screen, it's not likely that Seth Rogen and Evan Goldberg, the writers of Superbad and Pineapple Express, spring to mind first; the massive wave of skepticism directed at Sony's feature adaptation, which also features Rogen in the title role is probably expected. Expected, but also unwarranted: despite Stephen Chow's decision to leave the project after once signing to direct and play Hornet's sidekick Kato, Rogen and Goldberg found an exciting replacement in French director Michel Gondry (Eternal Sunshine of the Spotless Mind). If Rogen's claims about Gondry's crazy direction (as exemplified in the director's music videos) hold true, audiences might find it easier to see the thinned-up comedian as an action star than they expect, and Green Hornet could end up the Sherlock Holmes of 2010.