close
We take a closer at why My Name is Khan has been able to catch on so well in America. 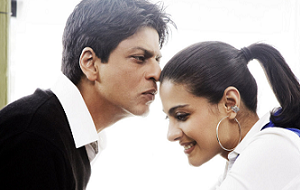 Enter My Name is Khan, a new Bollywood production earning impressive box office figures in its limited theatrical release. The movie raked in more than $2.2 million from only120 theaters last weekend.

The story follows an Indian man with Asperger's syndrome who comes to America and finds a bride. But the story touches on more complicated issues, like the fallout from 9/11, racism and anti-Muslim sentiments.

Are those hot-button issues stoking the film's box office success, or is there something else at play?

Ananda Mitra, author of India Through the Western Lens, says many of the cities where Khan is playing have sizable Indian and South Asian populations.

And while lead actor Shahrukh Khan may not have the name recognition as Brad Pitt or George Clooney, in international film circles he's the kind of actor who demands attention.

"He's popular with people in their late 40s, and he's also captured the imagination of second generation of Indians in the United States in their 20s," says Mitra, who serves as Chair and Professor of the Department of Communication at Wake Forest University. "And pairing him once more with leading lady Kajol is another treat for fans of their work."

Khan‘s incendiary subplots certainly helps goose interest, but it's also a matter of how the movie tackles the sensitive material, he says.

"It plays up the Muslim faith in a way that is quite different than what the handed down history of what Islam is [in the U.S.]," he says. While some films focus on the violent side of Islam thanks to the terrorist threat, it shows Islam in a different light.

"It could be a borderline Muslim propaganda movie," he says. For that reason he says there was some initial talk the film wouldn't open in Bombay, the home of Bollywood and many followers of Hinduism. That didn't happen, but the controversy surrounding the film's release only gave it more publicity.

"It created the hype, and that hype transcended distances," he says.

Mitra believes films like Khan will help American audiences embrace the Bollywood movie style, but he cautions the film doesn't strictly adhere to the genre. While the movie is longer than most American films, a Bollywood trait, it lacks the Slumdog style dancing seen in many Indian films.

"It diverts from Bollywood quite a bit," he says. Yet the music is integral to the film and helps shape the narrative.

That's an element he predicts will influence U.S. based movies down the road.

Mitra also thinks movies shown from outside the western point of view will be intriguing to audiences as well.

"Americans would like to see the US shown in a way we're not accustomed to seeing it," he says. "That's an appeal which will take over."