close
The director of Overture's thriller discusses new projects on the horizon as well as the first horror movie that scared him. 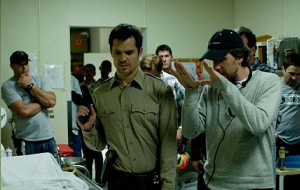 A movie fan never forgets the first horror film that made sleep all but impossible.

For director Breck Eisner, the moment came at the age of 12. The movie? John Carpenter's The Thing.

"It absolutely terrified me. I remember watching it and not being able to sleep for days," Eisner says. "The idea that people you know, you trust, could turn against you ... you don't know who's a friend and who's a killer."

Eisner hopes his new film, The Crazies, conveys some of that same isolation. The film, a remake of the 1973 George A. Romero thriller, casts Timothy Olyphant as a sheriff overseeing a town slowly going mad after a poisonous outbreak.

The two films share some common elements-a chemical outbreak and scenes of military personnel behaving badly. But while Romero worked with a shoestring budget-even by his standards-Eisner had a much bigger tool kit.

"The [better] budget allows you to get great actors," he says of a cast including the under-valued Olyphant and Radha Mitchell who proved her genre chops in Silent Hill and Rogue. The extra funding also allowed Eisner to research the proper containment suits with the Centers for Disease Control for an added level of authenticity.

The remake didn't have the cooperation of the U.S. Military, but a band of Army collectors helped save the day. The cast was able to borrow five attack helicopters from local military devotees to help flesh out some key story elements.

It‘s a far cry from the "‘70s era Jeep and guys in white painting smocks," from the original, he says.

The 1973 version isn't among Romero's most beloved films, but its prickly bend of shock and social commentary gave it a cult-like following.

Any remake of a Romero film has to have a dollop of commentary into the mix, he says. But he insists the film doesn't slow to a crawl to lecture the audience.

"It's first and foremost an exciting ride. That's a the key to getting a message out," says Eisner, adding the film shows how politicians can use the military to do their bidding for the wrong reasons.

"We're not saying the military is bad. We go out of our way to say that's not the case," he adds.

Critics strafed the adventure saga, but he recalls enjoying the process, warts and all.

"I was put in a position where the author [Clive Cussler] had absolute approval of the script. There were days where I was making it up and writing it on the day of the shoot," he says.

He recently spent two years wrangling over a possible Creature From the Black Lagoon remake.

"The writers' strike killed us," he says.

Eisner's next project should have a happier ending. He's been assigned to direct Flash Gordon-just don't expect Queen music on the soundtrack.

"It's not about the ‘80s version or Flesh Gordon," he promises. "It's definitely looking back to the ‘40s comics and pulling inspiration from that."