close
Kevin Smith's Cop Out and Antoine Fugua's Brooklyn's Finest will present moviegoers with a choice. 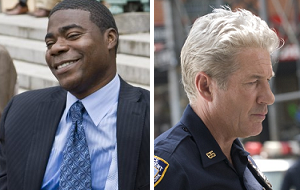 This weekend, Kevin Smith takes on his first project as a director-for-hire with the buddy cop comedy Cop Out, which will be followed up fast with the ensemble police drama Brooklyn's Finest on the following Friday. With two cop-themed flicks on the horizon, the question becomes: do audiences prefer their cops silly or serious? Or is there plenty of room for both? Here's a look at some successes and failures in each category.

48 Hrs. (1982)
Arguably the father of the genre, and the beginning of Eddie Murphy's occasionally illustrious career, 48 Hrs. is one of the few team-ups that takes the action more seriously than the comedy. By the time Another 48 Hrs. rolled around almost a decade later, Murphy was the star, and the tone of action comedies had considerably softened up, but in 1982, Nick Nolte was the bigger name, and veteran action director Walter Hill (The Warriors) kept the pair just short of seriously beating each other up amidst acid-tongued barbs. Audiences responded with $78.8 million in receipts, which jumps to $201 million when adjusted for inflation.

Lethal Weapon (1987)
Part of the way through Lethal Weapon, an exasperated Murtaugh (Danny Glover) sighs, "I'm too old for this sh--!", and the film carved itself a permanent place in the pop culture landscape. Not only is the Lethal Weapon series easily the most popular of all the buddy-cop franchises (spawning one more sequel than any of its genre counterparts), but the Richard Donner-directed series has become the template for every entry that's come since. A fifth film is currently looking unlikely, although producer Joel Silver seems to be keeping the dream alive, telling reporters from the set of Sherlock Holmes that it wasn't interesting to Gibson "now", but "it doesn't mean he doesn't want to do it ever." No doubt the adjusted domestic gross of the four entries-approximately $872 million-is playing a part there.

L.A. Confidential (1997)
It's hard to tell if Curtis Hanson's 1997 period piece about three detectives (played by the powerhouse trio of Kevin Spacey, Russell Crowe and Guy Pearce) trying to piece together a grisly murder involving as many cops as criminals has had any bearing on the ensemble cop dramas of the aughts, but the film was rewarded with two Oscars (a Best Adapted Screenplay for Hanson and Brian Helgeland and a Best Actress award for Kim Basinger) and earned a respectable $64.6 million at the US box office.

Rush Hour (1998)
The film that catapulted Jackie Chan to American stardom, eventually lifted Chris Tucker to the esteemed $20 million-paycheck club, and gave Brett Ratner a career, Rush Hour is one of the most successful buddy teams of the last fifteen years. It managed two sequels (one less than Lethal Weapon, one better than 48 Hrs.), and a total of $507.4 million domestic dollars between the three movies-even if distributor New Line eventually went under and Chris Tucker has been mysteriously absent from the big screen, the series has left its impact on the buddy-cop genre.

Training Day (2001)
Brooklyn's Finest helmer Antoine Fugua directed Denzel Washington in his Oscar-winning turn as a corrupt cop. Washington obviously enjoyed going a little over the top in a role that turned out to be the polar opposite of the heroic characters he normally plays. Ethan Hawke (who also appears in Brooklyn's Finest) was able to snag a Best Supporting Actor Oscar nod as well. The Warner Bros. release raked in an impressive $76 million domestically.

The Departed (2006)
Based on the 2002 Chinese crime film Infernal Affairs, The Departed blew past the wildest expectations usually afforded an American remake to take both the commercial and critical fronts by storm. It earned $132.3 million at the US box office, set a current benchmark in the cop/criminal genre that further films have failed to match (see below), and scored four Oscars, including a long-overdue Best Director statue for Martin Scorsese. For awhile, rumors continued to bubble about a sequel that would bring back screenwriter Willam Monahan and Mark Wahlberg's Staff Sgt. Dignam (Wahlberg was also nominated for an Academy Award), but recently, word on the project has gone quiet.

We Own the Night (2007) and Pride and Glory (2008)
As two of the higher-profile attempts to recapture the success of The Departed, James Gray's We Own the Night and Gavin O'Connor's Pride and Glory share several similarities: corrupt cops, family bonds, and talented multi-generational casts, including Robert Duvall, Colin Farrell, Eva Mendes, Edward Norton, Joaquin Phoenix, Jon Voight, and even Mark Wahlberg himself. Sadly, despite the two films' relatively low cost (only $21 and $30 million, respectively), neither managed to make a mark at the box office, only squeezing $27.6 and $15.7 million out of audiences who had apparently already had their fill of cover-ups and conspiracy.

From Paris With Love (2010)
Not a lot of "looking back" is necessary for this three-week-old teaming of a bald, crazy John Travolta and a straitlaced Jonathan Rhys-Meyers, sporting a bad American accent, but you wouldn't be able to tell from the film's dismal showing at the box office, where it's only eked out $21.4 million against a $56 million budget. As the Dinah Washington song goes, "What a difference a day makes"-no doubt the Cop Out producers are hoping that Travolta's Pulp Fiction co-star Willis fares a little better now that 21 of them have passed.