close
BOXOFFICE caught up with Clash of the Titans star Mads Mikkelson to discuss the Warner Bros. release. 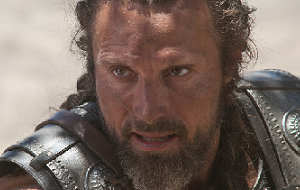 In Denmark, actor Mads Mikkelson is a star. Here, he's about to break out into the stratosphere with his second major Hollywood role after his turn as the villainous poker player Le Chiffre in Casino Royale. After James Bond, what's it like to battle a giant scorpion? Mikkelson talks to BOXOFFICE about taking on his first CGI role in a god and monster-controlled world where humans are small, squashable and ready for revenge.

Your character Draco is new-he wasn't in the original. What can you tell me about him?

He's a retired soldier, a Praetorian guard. And he's being dragged into this suicide mission to save the princess [Gemma Arterton] by Perseus-he's going on this mission against his own will. He's definitely not believing that Perseus has a plan-he thinks he's got a much better plan.

So he enters this mission thinking that he's doomed.

Definitely. It's a suicide mission. What else could it be with human beings fighting the Kraken? It's impossible. So he's definitely going towards his own doom, his own death, and he knows it. But he's got orders; he's a soldier. There's nothing else they can do. They just want to take the princess, hide in the city and wait it out. But nobody is listening to him and there's nothing he can do about it.

First of all, Perseus is the guy bringing him on this mission. If Perseus wasn't there, things would be nice. Their relationship is not good. Secondly, Perseus is a demigod. And if there's one thing Draco hates, it's gods. It's not starting out easily for those two guys.

Why does Draco hate the gods?

That's a story that will be revealed during the film, but basically, all human beings have a hard time with the gods. They're fighting the gods, resisting the gods, trying to take over their own lives. He's definitely one who believes that the gods have had too much control.

So this is a story about human independence?

What attracted you to the project?

The script. I found it interesting. Then I met the director, Louis, and he was extremely enthusiastic and very vivid when he was talking. He was getting up and showing everything with his arms, really getting into character himself. I thought, 'This is a good start-there's really good energy in this place.'

I heard you have a dance background-does that help you prepare to do action scenes?

I'm not dancing on the way to my part! All things like reading a script again and again, sitting down with the director help you understand a character. Is he fast? Is he slow? In this case, we knew we were going to be fairly physical: jumping around, fighting scorpions, a lot of running and fighting with swords. Obviously I had to wake up very early.

When you shot Casino Royale, you avoided seeing the original. And here, you also haven't seen the original Clash of the Titans.

I know! It was really big in the '80s but for some reason, it went under my radar. I'd never heard of it. Maybe I was just occupied watching Bruce Lee films when I was younger.

Were you one of the only people on set who hadn't seen it?

I think I was one of the only ones, yeah. There were a lot of jokes about the previous film that I didn't get-I had no idea whatsoever. It's probably so different from the original that it's not a must.

Now that shooting is over, will you sit down with your kids and watch it together?

I think I will, eventually. It wasn't like, 'Oh, I'm not going to see it until I'm done!' It wasn't an actor thing. I just didn't have it, so I didn't see it. There wasn't a rule like I was so much into my own part that I couldn't watch.

I remember the first film I saw you in, The Green Butchers [Denmark, 2003]. You had shaved a receding hairline in your head and everyone was shocked because you'd just been named the Sexiest Man in Denmark. But this is your first film with elaborate CGI.

I've done some big American films before, but I've never acted on a green screen beside an enormous creature that wasn't there. I was one of the lucky guys. Fighting a giant scorpion, I had this thing that I could ride. A lot of the other guys didn't have anything. Only the wind-they were fighting against nothing. I was lucky.

Did your acting style change when you were in scenes with imaginary monsters?

Mostly, scenes are scenes. Mostly, you're interacting with actual people. Here, I had a lot of scenes with Sam [Worthington]. Some scenes with Gemma and the other guys. It's real, normal, acting scenes between people. It's nice to have something where you can impact the movie. But in scenes when something's not there, that's the way it is. And after a couple of days, you get used to it, but it's a big challenge to imagine something that's not there. It becomes a fun game.

What do you picture in your head when you're fighting something invisible?

They made a big deal out of showing us animation of what they were planning to do. You have a fairly good idea what Medusa would look like, or the Kraken. The scorpions. They'll put an eyeline for us, but once you go through all these levels of what's supposed to be, that's part of acting. You imagine what is there. It's magic, this acting!