close
Frozen puts its protagonists in a battle for their lives without using traditional horror elements.

Mother Nature as the Monster 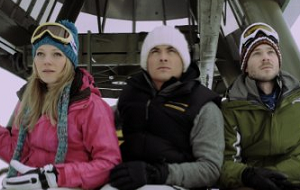 The new movie Frozen doesn't feature monsters, serial killers or supernatural beasts. The story of three skiers who get stuck on an abandoned resort‘s ski lift is a white knuckle ride all the same.

The film, from Adam Green of Hatchet fame, turns the typical horror movie on its head.

It's the second thriller in recent weeks to treat the elements as the antagonist. Late last year, the independent chiller The Canyon trapped a pair of newlyweds in the Grand Canyon.

Could audiences start seeing more of these films, shockers in which the enemy isn't Freddy Krueger or Michael Meyers but below freezing temperatures and garden variety wolves?

"You would think it's so part of our conscience, so part of the zeitgeist," Harrah says, what with real life crisis like the fear of global warming weighing heavily on people's minds.

Small screen programmers understand the allure of the man versus nature conceit, he says, witness reality shows like I Shouldn't Be Alive on The Discovery Channel

Harrah thinks it could be due to the backgrounds today's filmmakers bring to the set. He grew up in Idaho and spent a great deal of time outdoors. Other filmmakers, either those entrenched in L.A. culture or who grew up in urban areas, don't have an affinity for stories steeped in nature.

The director says another reason the nature settings appear resistant to filmmakers comes down to practical matters.

"My producer said to me, 'let's do this on a set. We can control it.' Are you kidding me? This movie will not work on a set. You're missing the whole point of this, the exposure to the elements."

Tony Timpone, editor of Fangoria magazine, says the limited release schedule for Frozen will likely prevent it from starting a trend. The film opens on Friday in only 10 cities.

And that, he says, is a shame.

"It is a solid piece of genre entertainment ... a refreshing break from the horror remake trend," Timpone says.

Also working against the film is the process behind its creation.

"It was a very difficult shoot, so I don't foresee a rush to the ski lifts to duplicate its success."

"Horror fans are made up of every stripe and color and they are very open minded," he says. "Frozen will appeal to all those who like a good scare and a suspenseful ride. It's the kind of movie that puts the audience in a 'What if?' mood ... what if that was me trapped on that ski lift? How would I react?"

Timpone finds films like Frozen and Open Water, about a pair of divers left alone in shark-infested waters, particularly frightening.

"These are horrors that can happen to anyone," he says. "Everyone knows about the potential dangers that lurk in the deep ocean, or an isolated, snowy mountaintop, but no one is really scared that a vampire, werewolf or bogeyman will get them in the night."