close
Even without big stars, She's Out of My League may have what it takes to post solid box office numbers. 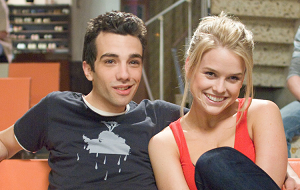 She's Out of My League isn't a sequel, remake or reboot. Nor does it have a marquee name above its title or the kind of media synergy to help it break through the modern marketing clutter.

What it has is a relatable story, one mixing an anxiety-driven romance with a populist brand of R-rated gags.

Sounds like it has the potential for sleeper status-assuming the film delivers the funny.

League stars Jay Baruchel (Tropic Thunder) as a regular Joe who ends up dating a stunning woman (Alice Eve, Crossing Over) who seems an unlikely partner.

"By their nature, sleepers are always pretty unpredictable since they're often movies that manage to tap the right subconscious mood of the audience at exactly the right moment," Toth says.

Yet League reminds him of two recent sleepers, a tip off that the film could find the audience's sweet spot.

Paul Blart: Mall Cop delivered a nebbish hero who somehow won the hearts and minds of many movie goers.

"As long as the actor can play it just right-low key and sort of sentimental without over doing the whole bit-it can have a surprisingly winning appeal," he says of characters like Paul Blart and the lead in League.

He also compares League to The Hangover. Both movies feature "a certain amount of crudeness, bad taste, and just the right amount of edgy humor can play strong to the modern audience," he says.

Chuck Walton, Senior Content Editor with Fandango.com, says She's Out of My League has a chance to break out as much as past sleepers like Superbad and The 40-Year-Old Virgin did before it.

The attractive cast helps, as does the fact that star Baruchel "has had memorable bit parts in everything from Million Dollar Baby to Tropic Thunder," Walton says.

But don‘t forget the plot, a "classic story of the underdog hoping to win the affections of the gorgeous and down-to-earth beauty next door," he says.

"Normal guys can relate to it as sort of fantasy wish fulfillment," he says. "And lots of girls can relate in that many of them would choose to date John Cusack in Say Anything over Brad Pitt in Thelma and Louise."

Male audience members can connect to scenes of guys hanging out and talking the way normal pals do, he says.

That will help attract the male demographic while women will be lured in by the romantic situation, he says.

The hardest part of giving birth to a sleeper hit is delivering just the right amount of promotional push.

"The modern moviegoer, especially the younger generation, isn't likely to be force fed any movie product that they're not already keen to see," he says. The trick is to market a movie like League while simultaneously allowing audiences to find it on their own as well.

"It has a great premise, a funny cast, and the previews look promising, but the film's best bet is to use all of those elements and actually be funny," he says.