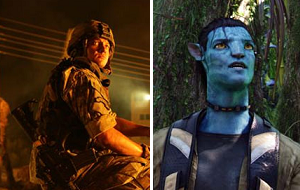 The Academy sends a clear message with this pick that strong box office is not essential to a Best Picture victory.

Best Foreign Language Film: The Secret in Their Eyes

Wow, I thought The White Ribbon had this in the bag.

The momentum continues to build...

A good pick. Unfortunately, this one never managed to managed to catch on at the box office. It only made less than $900K.

A no-brainer. It's an iconic score.

Interpretive dances are now officially the worst decision of the night.

James Taylor playing live is the best decision the producers have made all night.

Interesting pick. Thought this was going to go to The White Ribbon.

This is an interesting category simply because it pitted Hurt Locker against Avatar. Is this a sign of things to come?

There were a lot of non-horror films in the horror film montage. Edward Scissorhands? Twilight?

A groundbreaking pick on the part of the Academy. Nicely done.

This should have gone to Vera Farmiga.

Big upset! A bad pick. This award belonged to Up in the Air.

Jeff Bridges really should have made a Big Lebowski reference. Just sayin'.

John Hughes was the man. Pure and simple. Excellent tribute, and of course they ended with "Don't You Forget About Me" and the Ferris Bueller quote.

Tough category. Inglourious Basterds and A Serious Man were excellent as well.

Very nice! An excellent song from a memorable film.

Of course! A genuine classic gets the recognition it deserves.

No surprise here. This is the third straight year that the Oscar for Best Supporting Actor went to a villain.

Every year they say they are going to make the Oscar ceremony shorter, but then you have an unnecessary musical number from Neil Patrick Harris.

They have not cut away to Jack Nicholson yet! That should happen at least every 30 seconds or so.

Check back often for thoughts and the full list of winners.