close
INTERVIEW: Christopher Mintz-Plasse talks to BOXOFFICE about his role in Kick-Ass, and his (fake) involvement in Transformers 3. 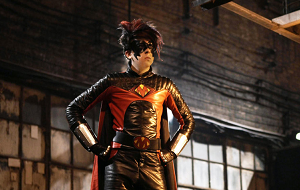 At 17, Christopher Mintz-Plasse landed the role of Superbad's McLovin' with a cell phone snap as a headshot. Two and a half years later, his character has become a comedy icon-a lucky break that doesn't happen to your typical kid from El Camino Real High. But where other young stars have become overnight sensations soon forgotten, Mintz-Plasse has smartly held back for projects he respects with directors he admires. Now playing Red Mist in Kick-Ass, he talks to BOXOFFICE about graduating into comic book flicks and the career path he sees ahead-and why his neighbors don't have to worry that he studied nun chucks under Jet Li's team.

Are you a comic book fan?

I'm not really a huge comic book fan. My dad is a massive comic book fan-he had issue one of Kick-Ass before I even read the script. He has comic books laying all over the house. I read them when I'm, well, taking a crap, to be honest. That's the one time I read comic books.

Did you try to keep what happened in the script a secret from your dad?

My dad loved issue one and I got the script instantly right after that. I guess he wanted to get into the movie more than the comics-he read the script right away and he loved it. He followed the comic books through the script.

Did you swear him to secrecy?

Completely. He's been a part of my movies for a while; he always reads the script, so he knows to keep his mouth shut.

How do you describe Red Mist?

He's a regular high school kid with rich parents. He's got a bodyguard that goes around with him everywhere, so it's really hard for him to make friends. He really wants to bond with his father in the movie, so they find a way together.

What did you do to prepare for stunts?

It's a pretty action-packed movie, but my character has only one major fight scene at the end. I got to work with Jet Li's fight choreography team for a couple of weeks. Chloe's training was more bad-ass than anything I've ever done.

What kind of stuff did Jet Li's people teach you?

My character's just a 17-year-old high school kid, so it was nothing too out of the box-nothing Jet Li would ever do. It was just simple nun chuck fighting scenes.

Anything you can do on your own to impress people?

Definitely not. I've forgotten everything.

Matthew Vaughn said you were a great actor. I wanted to share that compliment.

Wow! That's 100 percent true. I'm one of the best actors on the planet at this moment. And I will be working until the day I die.

Since debuting in Superbad, you've actually paced yourself and been choosy with roles. Talk to me about how you choose your parts.

Completely. After I did Superbad, I got a bunch of scripts where they wanted me to play the really nerdy virgin character who has sex with a really sexy girl. You're like, 'Whoa! That could never happen, but it's a movie so I'll believe it." I got a bunch of those roles and I completely avoided them. Then I got-at the time it was called Big Brothers, then it was changed to Little Big Man, then it was Role Models-and I was a huge fan of David Wain and Paul Rudd and Stella, and everything those guys have done. The script looked completely different than it turned out on the screen, but I knew working with those guys, that they were going to make it special. And it turned out to be a really funny film. Year One was another Judd Apatow movie, and he asked me to play that small role of Isaac-I'll do anything with Judd, I think he's a genius. And then I've got Kick-Ass coming out with Matthew Vaughn, and anything he does will be amazing, too. I pick my roles through who I'm going to be working with, and so far it's worked out.

There's a rumor that you're going to be doing Transformers 3.

Transformers 3? I have no idea! Are they making a Transformers 3? That's the first time I've heard that. But let's go along with it. Lets say that I'm attached and Jessica Alba is attached as well to play my love interest.

Done. What roles are you looking to take on as you make that challenging transition from high school characters to grownup characters?

I'm down to play everything. I'd love to play a dramatic role, or maybe a dramatic comedy, in the future. But I kind of want to do that with age. Right now, I'm comfortable in comedies playing the goofy character. I think in the future, I want to try it all-that's what I'm going to be aiming for.

When you acted in high school, what type of parts did you like to play?

I did a bunch of comedic seven-minute shorts that were very fun. I played a flamboyant gay character, which was a blast, and I was part of an improv group in my high school. That really helped me land the role in Superbad. My best friends and I would play improv games in front of the school-that was my favorite thing in high school.

I'm sure all the time, people must ask you how they can follow your footsteps and get discovered as a regular high school kid-what do you say?

I'm not the best person to ask. I got very lucky. With Superbad, my friend heard about the audition. I went in and beat out 500 or 600 kids for the role. I guess: take every audition that you can get. You never know when something is going to happen.

You've also got How to Train Your Dragon coming out.

I'm very excited about that movie. I haven't seen it fully done yet, so I'm very excited to. They came to me and said they had this very fat, large Viking character and they thought it'd be funny if my squeaky voice came out of him. I took that for what it was-a compliment-and I did it. It's been a year and a half process that's finally about to be done.

How did you get into character in a sound booth?

It's an animated movie, so I tried to be an animated version of myself. Very loud and obnoxious. They really get you just go-you have the pages in front of you and you add your own flavor, do a little bit of improv. The first session was close to a year and a half ago, and then they call you back every three or four months and you go in and do new lines. Once it gets closer to the movie, I actually had to go in two months ago and read one line. Just one line, and that was the end. I'm pretty sure I'm done with it now-it was a long process.

What was the line?

Probably: "Watch out behind you! There's a dragon!"

What are you excited about with the release of Kick-Ass?

I'm about to go around the world for a month. Dublin, Germany, Scotland, New York, San Francisco. That's going to be my favorite part.

A couple of things. I have a script called 68 that I really like that I may be doing in July. And then I have a big audition that I think will go well.

Can you give me a hint about what it is?

It's Ruben Fleischer's next movie, the director who did Zombieland. That was an awesome, awesome movie.

I don't enjoy watching myself on screen. I always feel like I can do better. Which I guess is good because I have that drive. But I don't enjoy seeing my face on a huge screen before a hundred people. It makes me very, very nervous. I just enjoy filming, and then I let Matthew and the editors do their process and I just sit back and watch it in awe.

Have you ever walked into a room where one of your movies is playing on DVD?

Yeah, that happened once. They did it as a joke. I was going to my friend's house right when Superbad was coming out on DVD and they popped it in. I walked in right when it was my scene and I just walked straight out.