close
INTERVIEW: The young actor talks to BOXOFFICE about his breakout role in Lionsgate's superhero flick. 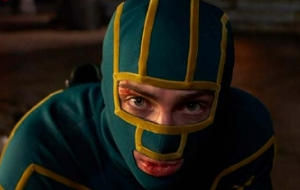 At 19, UK actor Aaron Johnson has already played two icons: Charlie Chaplin (Shanghai Knights) and John Lennon (the upcoming Nowhere Boy). For his biggest stateside starring role yet, Johnson plays a humbler character, a nerdy teenager named Dave Lizewski who transforms himself through sheer, stupid will into a vigilante named Kick-Ass. But as Johnson explains to BOXOFFICE, what fascinated him about the quirky role isn't just that he turns from zero to hero. It's that underneath the green leotard is a normal boy who people relate to-even if they'd rather not be a bruised wannabe who can get beaten up by a trash-talking preteen girl.

When did you start reading the original comics?

I was in New York when I found out I got the job and I went down to Planet Comics-I think it's on 14th and 8th. At the time, Kick-Ass had only three issues and they were short, 15-page little booklets. They were neat, really well-done and indie. But it had gotten only to where Kick-Ass is putting on a wet suit, basically. Nothing major was going on yet in the comic. It was about a kid who loved comics and it was quite quirky. I read the script and got all of the mad gangster fighting, and the young girl Hit-Girl, and Big Daddy and Red Mist. The whole plotline I knew and it felt strange to be around all these comic book fans dying to know what happens it the next book-I already know what happens in the end. It was interesting, and by the time we finished filming, Kick-Ass was on its fifth issue. We were done and only two more issues had come out. I was reading a lot of other comic books and stuff for my character-he's really into them and there were a bunch of comic books on set. We were constantly reading them.

Kick-Ass is walking around with his secret of who he is, and you're walking around in a world of people who love these comic books with your secret of knowing what happens when nobody else does.

What made you want to play this part?

I kind of just came across it by pure luck and coincidence. I was in the right place and the right time. I met the director, Matthew Vaughn, on the right day. I was quite late to be cast in it-they already had the rest of the cast-and I was just a last-minute decision that must be made. So I was really lucky to be on it. It was just a script that came along which was so rare for anything in Hollywood. I was in America at the time, I was in LA casting for a bunch of different things, and that script above everything else was so rare. It had this quality to it that just shot out-it wasn't like any ordinary comic book blockbusters sort of movie. A British director who'd done stuff like Layer Cake and produced Lock, Stock and Two Smoking Barrels. Great, gritty gangster movies that had done very well. With that British edge on a comic book about an American high school kid, it was just so f-king wild and bizarre and interesting. You came across all the violence and the language that was in it and you knew that he was going to do a good job. I never read comic books before. All I knew of Spider-man, Superman, X-Men, Batman were movies. This is a kid who makes you think, 'What if I actually went out and did it?' It was more like reality. If you make it more like that, you can bring it home to people, make it more natural. It was different, as well, character-wise. I'd just done a film in England called Angus, Thongs and Perfect Snogging playing this young, heartthrob role, the love interest role, and this character's completely not that. He's a nobody at school who doesn't get anyone's attention-he's dorky and a bit shy. And he creates this mad image of himself to try to change his personality and character. I thought it was really interesting. And this character grows as a person. You kind of don't really want to be him. You kind of feel sorry for him. He's trying to do the good thing, but he's not so good at it because he's getting his ass whipped all the time. He needs that motherly protection which he doesn't have in the film. His mother died. You just want to wipe up the blood from his lip and make him feel better.

And he's always very capable of getting hurt-you're scared for him.

Definitely. On the one, you've got Hit-Girl. She's 11 years old. She's got a mouth like a sailor. She's funny, so you like her. She's the badass girl that we all wanted to know or be-she's a little girl beating the s-t out of people and she's really good. You get all of the crazy comic book action through her. You see it through her-she's been brainwashed with all this comic book stuff by her dad who wants to get revenge. She's forced to do all this f-ked up, sick violence on everyone. Where as Kick-Ass is the character that everyone relates to because in real life, that's impossible. She's invincible, fair enough. You don't mind watching her go out and kick the s-t out of people, which is really weird and twisted. You think that an 11-year-old girl is safer than this 17-year-old kid. You flip your perspective. And then you're like, 'No, no, no-let the 11-year-old girl go out alone because she'll kill all these awful gangsters! He should probably stay at home because he'll probably get hurt.' You're all f-ked up because you relate to him because it's true-you can't go out there and do all that s-t. You feel sorry for him and then you want to nurture him. It's brilliant what Matthew's done; he's really messed with people's minds. It wouldn't be acceptable to let any 11-year-old girl go out and fight. It's kind of abuse, really. Her daddy's taught her to fight with guns-that's a form of abuse.

How did you train for the role physically?

I didn't have to train-I was told to stop doing weights. I used to go to the gym and all sorts of things and Matthew stopped me doing it. He said he wanted me to pretty much stop eating. He said, 'You need to be an ordinary skinny kid. You need to look like that superhero costume looks baggy on you.' My character gets beaten up all the time. He's not fit, he's not muscular. Completely opposite to James McAvoy in Wanted getting ripped for the role. My character made me be anorexic.

You went the Christian Bale route.

And I didn't have to do any crazy training. Chloe [Moretz, Hit-Girl] had to do three months. She used to fight with bamboo sticks and samurai swords and knives and guns. She had to shoot a lot of f-king guns, she did. Jealous of all that.

He's really funny-he really brings everything off the page. He just completely brings it alive. He does this Adam West take on Big Daddy and it completely works. At first, me and Matthew were just pissing ourselves in hysterics-it was so funny. And then Matthew's like, 'What the f-k are you doing?' He explained it and Matthew was like, 'Oh s-t, that's so good!' It worked. He's really quirky and interesting-he's really cool on set.

You touched on this when you were talking about Chloe's character. Kick-Ass has this theme about influences-almost cults. She's influenced by her dad. Your character is influenced by comic books, and then he influences this whole other class of people to want to be superheroes.

Do you think it's going to make people who see it go crazy?

There are people who actually do that right now. When we started filming, there were these two f-king douchebag idiots running around New York with costumes on of Robin and the Green Lantern. They were running around trying to clean up the streets like Sherlock Holmes. Helping old ladies across the street. If it makes them happy, it makes them happy-do what you want to do. All up for that. But luckily this is an R-rated movie, so hopefully it won't set off gangs of kid violence. Kids aren't going to start blowing up things. There might be an intake of kung fu lessons. Your local karate center might sign up a few more blokes.

True story: in the town I used to live in, there was a guy who dressed up like Batman. Nobody knew who he was. This was in college, and he would walk around and visit all of the sorority houses and knock on their door and ask if they were okay. He wasn't even in a cheap Batman outfit-he was in a full molded-rubber costume. He walked everywhere; he didn't have a Batmobile. It was a small town and we'd drive by him in the middle of the day getting harassed by the cops. We found out one day he was literally living under a bridge-we went down there with flashlights and he was in his full Batman costume at ten at night. And then one day, he just vanished.

There's no crazy people in England?

The comic book thing isn't as big in England as it is in the US. But I have this great crazy lady where I live in Camden. I call her The Mascot. She's this bag lady and I see her walking up and down the road. She's about 85, back bent, white hair, carries this orange Sainsbury's shopping market bag filled with birdseed. She has this whole flock of pigeons that just walks behind her. She walks right down the middle of the road-she stops cars, buses, everything. She's the funniest woman ever-I see her all the time, she's brilliant. I see her in places that are quite far away from my house, too. It's bizarre. Although she's a bit poverty-looking, all in rags, I bet she's one of those millionaires. I bet she's ridiculously rich, but just has f-k-all to do, so she just walks around. I'd love to find out who she is and where she lives. She's barking mad, but she's the best.