close
NEWS: Check back often for news and views from the biggest exhibition industry convention of the year. 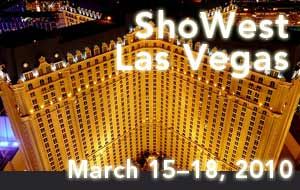 Warner Bros. unveiled some new footage from their impressive 2010 slate this afternoon.

Dan Fellman, president, domestic distribution and Veronica Kwan-Rubinek, president, international distribution, kicked off the presentation by highlighting the studio's success in 2009. Warner Bros. reached a record-setting haul of $4.010 billion worldwide last year thanks to the strength of such films as The Hangover, The Blind Side and Harry Potter and the Deathly Hollows.

Alan Horn, president and COO, then took the stage to introduce some impressive clips.

Clash of the Titans was first. Director Louis Leterrier and star Sam Worthington were on hand to introduce the 3D footage, which marks the first time Titans was viewed in its converted format. The Kraken creature that is featured prominently in the film's trailer looked amazing in 3D. The conversion comes across as quite seamless.

Inception followed Titans. Christopher Nolan took the stage, and he was met with a healthy round of applause from a room full of people who made a lot of money off of The Dark Knight. While Nolan remained vague in terms of the plot of Inception, the footage speaks for itself. Nolan seems to have reached a new level of visual prowess with this latest effort.

Sex and the City 2 writer/director Michael Patrick King took to the stage next. "Sex and the City 2 is not in 3D ... it's not even in double-D," cracked King before introducing Sarah Jessica Parker, Kristin Davis and Cynthia Nixon. The extended look at what's bound to be a successful sequel received a positive reaction from the crowd.

Zack Snyder followed SATC 2 with footage from Legend of the Guardians. The director, who is best known for R-rated action flicks such as 300 and Watchmen, said that he directed Guardians so that his six children could actually watch something he's made. Guardians promises to be another animated hit in 3D.

Director Greg Berlanti and stars Katherine Heigl and Josh Duhamel presented footage from their dramedy Life as We Know It. Heigl is on fire after the success of 27 Dresses and The Ugly Truth, so Life as We Know It should do quite well.

Todd Phillips returned to ShoWest after successfully presenting The Hangover last year. Phillips has new comedy due in November called Due Date. Stars Robert Downey Jr. and Zach Galifianakis were on hand, and they did a nice little bit of improv for the crowd. Galifianakis joked that he wanted to get back to his room to "do cocaine off a vertical mirror with my parents." The clip filled the house with laughter that was almost as loud as what The Hangover delivered. Expect another massive hit.

Last, but certainly not least, the audience was treated to some rough, non-3D footage from Harry Potter and the Deathly Hollows (Part 1). Grosses should be through the roof for the flick, especially with the added bonus of being in 3D.

Technicolor 3D aunches in North America on more than 150 Screens.

This morning, movie theater employees from chains both big and small were recognized at an "All-Industry" Breakfast for the way they marketed 2009 releases.

Moderator Marie McClaflin of Arc Brand Marketing started the discussion off on the topic of how theater chains and studios decide to use unconventional marketing techniques.

"We look for films that need an additional push, and ones that lend themselves to events," said Jeremy Devine. Devine cited Julie & Julia and Hairspray as two projects that helped build their audiences by using events.

Nancy Klueter pointed to G-Force as a film that required a different marketing approach than what is given to more conventional Disney material.

Strong marketing often comes from a cooperation between studios and exhibitors. "We will work with managers to create marketing around an idea they have," said Eric Carr.

"The media environment is so fractured that we want to embrace new technology," said Devine. "But we don't want to leave behind the old ways of doing things."

"As a large circuit we have a lot of regulations. We drive the strategy out of the corporate office," said Westerling.

Other awards given out at the breakfast were the The Bert Nathan Memorial Award, which went to Shelley Feldman of the National Association of Concessions (NAC) and the ShoWest Alliance Award, which was given to Chuck Winans & NAC.

Dan Glickman's final State of Industry speech at ShoWest was cautiously optimistic. Glickman, who will be leaving the MPAA on April 1 to work with Refugees International, focused on the strength of 3D and digital cinema without shying away from issues such as piracy.

In a written statement, Glickman cited the fact that the movie industry employees 2.4 million Americans. That's no small accomplishment when many industries continue to lay off workers.

"If I could leave this community with one piece of advise it is that we cannot forget our power to change people's lives, and, in doing so, to change the world," said Glickman as he finished up his speech. "It's been an honor to work with you and to represent this extraordinary American filmmaking community. I won't say 'goodbye'-just 'see you at the movies.'"

John Fithian also took the time to congratulate the exhibition industry for its role in helping create a nearly $30 billion worldwide haul in 2009.

"There are many reasons for this tremendous success," said Fithian. "Movie theater owners have invested millions in new theaters with the latest technology, providing our patrons a better viewing experience with more comfortable seats and unobstructed sightlines in stadium seating. Modern multiplexes provide moviegoers with unprecedented convenience in selecting movies and show times. Online ticketing and automated kiosks make ticket purchases simple and hassle free. In many locations, exhibitors have begun to offer premium experiences with reserved seating, valet parking, concierge services and restaurant and bar services. And of course, digital cinema and 3D projection have begun to provide the ultimate immersive visual experience."

A major NATO talking point is always the concept that exhibitors want to be able to play strong films throughout the course of the year. Progress is being made on that front as well.

"Significantly, the distribution patterns of commercial product have continued to migrate across all 12 months in the year, and not just in the summer and holiday periods," said Fithian. "The release of a picture like Alice in Wonderland at the end of winter produces huge results." The Disney release opened to a staggering $116 million domestically.

Fithian also celebrated the fact that as many as 2,500 3D screens will be installed this calendar year by the three companies involved in the DCIP: AMC, Cinemark and Regal.

As always, the threat of piracy looms large over the exhibition industry. NATO and the MPAA are currently working with Europe, Mexico and other countries to spread effective American anti-piracy techniques such as watermarking and rewarding employees who catch pirates with camcorders. With more and more films being released on the same day across the globe, the international exhibition community has to increase its vigilance.

ShoWest/Fandango Fan Choice Award to be presented to The Twilight Saga: New Moon

Three topics dominated the Opening Day Luncheon: 1) The theatrical release window; 2) Getting healthy food options into movie theaters and 3) Avatar made a lot of money for a lot of people.

While there will be no shortage of praise for Avatar at ShoWest, there will also be plenty of soul searching when it comes to how studios and exhibitors can work together to reach a consensus over a release window that is shrinking each year.

In his speech, Michael Lynton, chairman & CEO of Sony Pictures Entertainment, stressed that Sony makes films to be viewed theatrically, not on iPods. Yet he also lamented the impact that sagging DVD/Blu-ray sales are having on studios.

Lynton also made a push for exhibitors to seriously consider healthy food options at theaters. Popcorn and candy don't have to disappear, but yogurt, apples and granola bars may be popping up in more theaters.

Rich Gelfond, CEO of IMAX, not only boasted about Avatar's success, but also about the promising slate of films that the company will play in 2010. From Iron Man 2 to The Twilight Saga: Eclipse, its bound to be another healthy year for the really big screen company.

Jack Kline, President & COO of Christie, used the occasion to discuss how far the digital revolution has come over the last several years. There does seem to be a feeling that a full digital rollout is closer to becoming a reality, and that's been missing at recent conventions. It's a relief.