close
Will mainstream audiences be expecting something that Green Zone can't deliver?

Not Exactly 'Bourne Goes to Iraq' 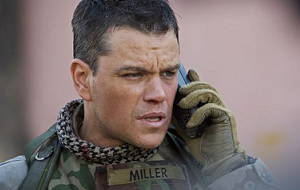 Everyone is after one man. Car chases, gunfire, explosions, fighting sequences and unanswered questions lead up to an interrogation with a man asking Matt Damon, "Who are you?" No, the answer is not Jason Bourne. But, it sure seems like it.

In Green Zone, Matt Damon plays the role of U.S. Army officer Roy Miller who is given the task of finding weapons of mass destruction in Iraq. After discovering bouts of faulty intelligence, Miller breaks free of his military duties to single-handedly work against a (potentially) corrupt U.S. government.

If the plot line sounds familiar, it should. The film is directed by Paul Greengrass, the man behind the Bourne sequels. Like in the Bourne films, Matt Damon fights against a government conspiracy to uncover truths. The main difference in Green Zone is that this time he's not fighting for his identity-he's fighting for the American people as he tries to discover answers to his mission in the "green zone."

The film is loosely based off the book by Rajiv Chandrasekaran, Imperial Life in the Emerald City: Inside Iraq's Green Zone. The actual "Green Zone" is a 3.8 square mile area in central Baghdad swarming with international presence since the start of the war.

Many people may end up viewing Green Zone as something of a real life version of Bourne, and that wouldn't be entirely unfair. Greengrass even admits this in his own foreword to Chandrassekaran's book: "Sometime in early September 2004, I began work on a film set in Iraq. I wanted it to ... take some of the huge audience that had enjoyed the Bourne series to a real world setting and encourage them to consider whether the mistrust and paranoia that characterized Bourne's world was so far fetched after all." In other words, Greengrass wanted to find a storyline that would fit around his idea for a real-life Bourne film.

Similarities between trailers for The Bourne Supremacy/Ultimatum and Green Zone make the film look like another Bourne sequel. Lines such as, "We have a threat. Take him out," and "You have no idea who you're dealing with here," from Green Zone trailers begin sounding really familiar when looking at those for the Bourne sequels. For instance, a line from one of The Bourne Supremacy trailers says, "You have no idea what you're getting into." Another from The Bourne Ultimatum trailer goes, "We need to find him and we need to take him out."

Robert Marich, author of the book Marketing to Moviegoers, isn't surprised at Green Zone's marketing strategy. "Political films have a long history of performing poorly so as a rule film marketers emphasize thriller, other genres or star power," says Marich.

2007's Lions for Lambs was marketed as a political war movie. The only thing bolstering the critically-panned effort was star power the Tom Cruise, Meryl Streep and Robert Redford. The film managed an underwhelming $62.6 million worldwide.

In the Valley of Elah, which is also from 2007, serves as a prime example of how star power couldn't save a bleak, uncompromising film about a father uncovering the truth about his son's death in Iraq. Despite boasting three Oscar-winning actors-Tommy Lee Jones, Charlize Theron and Susan Sarandon-the film tanked, bringing in under $7 million domestically.

Even though it has won six Oscars and endless critical praise, The Hurt Locker has managed only $16 million worldwide from theatrical grosses. Summit properly sold the film as an adrenaline rush, yet it still failed to find a sizable audience.

Doug Brode, a television, radio, film professor at Syracuse University feels that the message of war films may not be as important as we are led to believe. "When they (average, ordinary people) get to the movie I think the message of the movie matters less than whether the movie pays them off," says Brode.

Brode points out both films made a lot of money because of the way they were marketed. "They both paid off with action/adventure and comedy-the things they promised."

Similarly, Brode believes if Green Zone delivers a pay off to the viewer then it will do well. "If they sell the movie as a Bourne type and people get that but also get liberal politics I don't think they're going to mind too much."

"If they get just liberal politics without the action/adventure I think even a lot of liberals are going to be ticked off," adds Brode.