close
Hot Tub Time Machine looks to capitalize on a feeling that is lasting much longer than most bouts of nostalgia.

The Rush of '80s Nostalgia

Lately it seems as if the 1980s never actually ended. 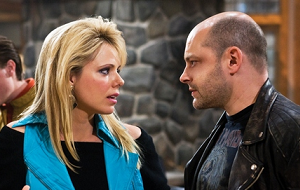 In the coming months we'll see a remake of Red Dawn, reboots of The Karate Kid and Tron and a reunion of '80s action heroes Sylvester Stallone and Dolph Lundgren in The Expendables.

This weekend, Hollywood brings the ‘80s back courtesy of a not-so ordinary hot tub.

The new R-rated comedy Hot Tub Time Machine throws three 40-something pals back to the year 1986 for them to relive their past glories - and missteps.

John Cusack, Craig Robinson and Rob Corddry star as old friends who get transported back to their teen selves and must deal with Poison ballads, leg warmers and other ‘80s relics.

The film even trots out Chevy Chase and William Zabka, the blonde jerk from two Karate Kid features and Back to School for cameos.

Steve Spears, online entertainment editor at the St. Petersburg Times and host of its blog Stuck in the ‘80s, says the ‘80s nostalgia boom has been going on for roughly 10 years.

"It's lasted a lot longer than I'm sure anyone expected. It sort of helps that the last two decades were pop culture wastelands," he says.

He credits the Adam Sandler comedy The Wedding Singer for its emergence. The comedy grossed an impressive $80.2 million domestically, which equates to around $128.2 million when adjusting for inflation.

"Suddenly, it was cool to like Journey and Asia again," he says, adding the movement gained traction with VH1's "I Love the '80s" series.

Spears points to ‘80s retreads like Red Dawn, The A-Team and A Nightmare on Elm Street as further signs of the trend, but he's not sure every film from the decade should be redone.

A Ferris Bueller's Day Off remake "would be a huge mistake," he says. Yet after the recent passing of Bueller's Day Off creator John Hughes, it's hard to imagine that Hollywood is not at least pondering new versions of his material.

One reason Hollywood keeps returning to the ‘80s is because it's so easy to recreate-at least on paper.

"There's an art form to picking good '80s music and avoiding the clichés," he says, citing Musical Youth‘s appearance on the Wedding Singer soundtrack. "Who's thought of them in 25 years?"

Getting the right clothing on screen can be just as tricky.

"You can't just throw a ‘Frankie Say Relax‘ shirt and parachute pants on everyone and make it believable," he says. Sure, some teens dressed like that, but most ‘80s dwellers opted for "concert jerseys, blue corduroys, and maybe the occasional pink tie."

A film like Risky Business should be the ‘80s template for Hollywood, he says, given its understated fashion and the characters' obsession with post-college success.

"I'm surprised Hollywood hasn't remade that one yet," he says.

Of course, taking '80s nostalgia too seriously can be dangerous. See Michael Mann's Miami Vice for a prime example.