close
We take a look at whether or not Aaron Johnson will go on to bigger things after starring in Kick-Ass.

A Bright Future Ahead? 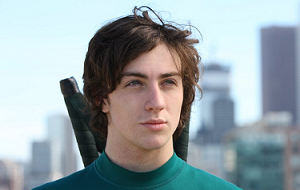 Young actor Aaron Johnson could be the next Shia LaBeouf-or Corey Feldman.

The industry is always looking for a new "It" young actor-just look at all the money being hurled at Twilight co-star Taylor Lautner even though he's never opened a movie without fangs or fur.

But Johnson will get a big boost this weekend courtesy of his starring role in Kick-Ass.

Johnson plays a nebbishy teen who creates a superhero alter ego to fight crime. The film has solid buzz from comic-friendly movie goers and features an electric blend of action and R-rated content.

Will the movie springboard Johnson into LaBeouf territory?

Jeremy Parsons, co-host of "The Big Tease" on Reelzchannel, says the British actor has an uncanny ability to speak in a perfect American accent. That should endear him to stateside audiences, along with his regular Joe affects.

"I think the movie will be a big introduction for him," Parsons says.

But predicting the next breakout actor is pretty tricky these days given all the variables in the industry - and with public opinion difficult to gauge.

"He has a lot of versatility," Parsons says, pointing to his solid turn in The Greatest, a new drama co-starring Pierce Brosnan.

The actor seems like a worthy choice to play Spider-Man in director Marc Webb's upcoming reboot of the superhero franchise-now that the rumors of Logan Lerman landing the part have been debunked.

"No one knows who he is yet. That could be appealing," Parsons says of Johnson.

One thing standing in his way is a precocious child actor with a showy role of her own. Chloe Moretz steals plenty of scenes in Kick-Ass playing Hit Girl, the pint-sized superhero with a big attitude.

"There's the shock value of this little girl with foul language," he says, something which could take attention away from Johnson.

Parsons spoke with Johnson during the recent South by Southwest Festival, and found him pretty mature for his age-19.

The real test is often what roles an actor lands following a high-profile gig. Parsons says so long as Johnson picks roles that illustrate his range he should have a shot at big-screen fame.

"He needs a few more solid roles," he says.

Recent superhero films have used established names to kick start a franchise. Think Robert Downey, Jr. in Iron Man and Christian Bale in Batman Begins. But Christopher Reeve vaulted to fame as Superman in the late 1970s, so casting an unknown in a "super" role can be transformational.

Jenelle Riley, National Film and TV Editor with Back Stage magazine, puts the brakes on talk that Kick-Ass will make Johnson a star.

"His performance is fine, but the character of Kick-Ass is not who people are going to be talking about after this film," Riley says, citing Hit Girl as the real star-and Nicolas Cage's Big Daddy character as well.

"Aaron is serviceable, if a little dull, in the title role," she continues. "I don't think it's his fault, but I don't think this is going to make him a superstar."