close
FEATURE: IFC Films looks to have something of a sleeper hit on their hands thanks to The Human Centipede.

Does IFC Films Have A New Horror Sensation On Its Slate? 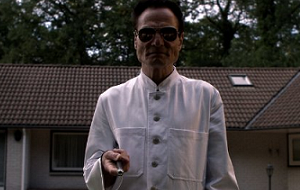 The Human Centipede seems a pretty unlikely film to spark the next Jason, Freddy or Freddy.

After all, star Dieter Laser doesn't wear a hockey mask, boast ugly scars or wield a sickle or any other killing device. His weapon of choice is a surgeon's scalpel-and a mind fiendishly over the edge.

The new film, available via Video on Demand this week as well as in select theaters, is causing quite a stir on Flixster.com all the same.

Or at least the film's trailer is.

The movie concerns a deranged scientist (Laser) who traps three people in his home in the hopes of surgically connecting them into one, long centipede-style creature.

"People are seeing this trailer and they're talking about it," says Singh, who adds roughly 7 million users per month use his site's mobile services. "It shows the real power of the Internet."

It wouldn't be the first time a low budget horror movie came seemingly out of thin air to capture the public's imagination. Last year's Paranormal Activity proved a dirt cheap film could bring in major money if it made audiences jump in their seats.

But Michael J. Hein, Festival Director with the NYC Horrorfest, says movie buzz can be a curious thing.

The horror community features plenty of web sites which take material from their peers and expand on it, Hein says. So what starts as a simple web posting can take on a life of its own. And, he says, some buzz can simply be effective marketing campaigns in disguise.

And, in the case of both Paranormal and The Blair Witch Project before it, that buzz can lead audiences to expect too much from the actual film.

Hein praises Centipede as a slick feature with an utterly bold premise-something rarely seen in the horror genre.

Yet the film does have its share of viewers that are less than enthusiastic.

Rachel Belofsy, festival director and founder of ScreamfestLA, says the reaction was mixed when Centipede screened at the festival back in October.

"The curiosity factor will drive people in," she predicts. But while the film's matter-of-fact style is drawing comparisons to the work of director David Cronenberg, Centipede won't have the mass appeal of a more "safe" horror film like Paranormal Activity.

Centipede doesn't employ the single cam approach like the aforementioned sleepers, but the film's writer/director, Tom Six, says he consulted an actual surgeon to make sure the procedures seen in the movie were medically sound.

The big question remains if the buzz and online activity will lead to ticket sales. Recent weeks have proven that buzz-and cool points-aren't enough for movies like Kick-Ass to dominate the box office.

But The Human Centipede starts off with a strong presence on Flixster, a site that is full of important reviews from average moviegoers.

"It's rare for an independent film of any nature to have a significant presence and activity," Singh says. And with the movie world constantly evolving to include Video on Demand receipts, instant Twitter reviews and other social media cues, it's impossible to predict the box office tally for "Centipede" at this point.

"What does it mean? I'm not sure anybody can answer that," Singh says.