BOXOFFICE sat down with Walt Dohrn to discuss his work on the Shrek franchise.

Here's some of what you've done with the Shrek team for the last three films: you're the Head of Story, a writer, the voices of bit parts like the Evil Knight and Nanny Dwarf, and even a song writer for tunes like "Fairy Godmother Song." 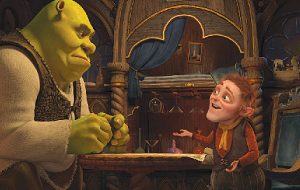 The Shrek movies have been such a great opportunity. I've gotten to help write songs, do voices, write jokes, work with actors, and now I've finally got a big role.

As Head of Story, you even helped come up with your character, who takes the series in a really interesting direction.

Not only do I work closely with Mike, I manage a team of story artists. The other three Shrek films had such great villains: Farquaad, the Fairy Godmother, Prince Charming. But they were all very theatrical. They were British and very proper. How to compete with those villains? We thought we'd go the opposite way: a little ratty, nervous, almost trashy character who still had the appeal and humor.

Do you see Rumpelstiltskin as a pure villain or does he get any of your sympathy?

He's definitely a little redeemable. First of all, we tried to make him cute. He has an infantile, juvenile way to him and that's how he lures people into his deals. He has an innocence to him-that's his appeal. And he's redemptive in that he really loves his goose Fi-Fi.

It's true. In the early scene where he convinces Shrek to sign away everything, even I was a little swayed.

It's a really hard thing to get a character like Shrek to even want to do a deal at all. He's always suspicious of everyone, being a loner most of his life. We had to really carefully walk that line. Of course, Rumple has been following Shrek and he always finds people when they're at their weakest point.

Did you brainstorm other villains or did you seize upon Rumpelstiltskin right away?

Right away, we knew we wanted to do a Rumpelstiltskin story. It made sense given where Shrek was in his life. In the classic story, Rumple extracts a promise for a first-born child. Here's Shrek with his family, and what would be his greatest loss? Losing his children. Rumple doesn't take them specifically, but he does take his whole life away. It was organic.

You were originally recording the voice of Rumpelstiltskin just as a scratch track, but you did it so well that when the time came to cast, they couldn't think of anyone else.

We work so quickly and loosely before we bring the actors in that Mike and I would play a lot of characters in the film. We would just imitate Antonio Banderas or Eddie Murphy or Mike Myers as best we could. And we would use that to cut to. When Rumpelstiltskin was developed, we were thinking that later we'd find a voice for him; I never thought I would do it. But as the voice grew, it became essential to this story. The film is so dark that we needed its humor-it's so specific to the story that it just stuck. As more crew members came on, they fell in love with it. We couldn't place who would play him, and since we had a stew of traits from other characters in the voice, we just stuck with it.

Who were you channeling to invent his voice?

Bette Davis in Whatever Happened to Baby Jane? was a big one. She's scary, but she's also got that playful, young juvenescence to her. She can go from sweet to scary in a turn. She can be really evil-she's such a great character. And then The Bad Seed, the old '50s B horror movie with that chilly little girl. Again, she'll turn from innocence to evil in a second. That, "Oh, I have the best mother in the whole world!" and you know something bad is going to happen. Sean Penn in The Falcon and the Snowman was another. He plays a real life person with this energy and nervousness-he could explode any minute. And then the Hitchcock film Strangers on a Train. There's a character in there who's swaying this guy, convincing him to trade killing someone, and he has that smooth dealmaker thing. "Come on, guy..." We swirled those elements and things started to come out almost against our will-these weird sounds, and we just mixed them all together.

Are you a voice guy, always doing impressions at home?

My daughter and I do voices at home all the time. My old joke used to be when I would give presentations for Shrek the Third, "I'm Walt Dohrn, I work on the Shrek movies. You may remember me as Guard #2." I'd play the Principal, or the Van Student. I've been pitching in and doing the voices that we use when we do storyboards, but this one's been the most fun.

From the Head of Story viewpoint, what was it like concocting such a bold plot for the last Shrek film?

It was a challenge. I started on Shrek 2, did Shrek 3 and then Shrek the Halls. It was a great challenge to approach this film and bring fresh, new ideas to it. And an honor to close out the series in such an organic, natural way.

What's been the key to the appeal of the Shrek series?

Shrek is a great anti-hero. We can relate to all his flaws. And what's nice about being able to do four films is that his life has evolved as ours have evolved. Whether you saw him as a kid, or as I did in my twenties, just growing up with it is the appeal. Plus, hitting some real emotion. These characters are real to us. When Shrek and Fiona were having marital problems, we actually brought in marriage counselors and said, "How would you deal with these problems that Shrek and Fiona are having?" I remember sitting in that meeting and thinking this is how real these characters have become: we've gotten them marriage counselors.

Does your own life come through in the characters? As you've had children, Shrek has had children...

Definitely. We wanted the emotions to be as real as possible, and whether it was issues with our own parents, or how we'd feel if we lost our own children, we've infused those real feelings into the characters. I still cry at some of the moments.

Aw, that's so nice. I wish he'd say nice things to me in person. We've had the best time. Mike and I have known each other since school and we've always wanted a chance to work together. It's been a huge joy. And even though I play the voice of Rumpelstiltskin, he's really as much a part of the role-him and all the animators. It's a community that built this character.