close
FEATURE: Are filmmakers taking the right approach when it comes to conveying their message to moviegoers? 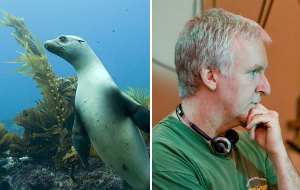 The entertainment industry is celebrating Earth Day in a number of (green) ways.

The Landmark Theatres chain is switching to eco-friendly popcorn bags, director James Cameron is kicking off an effort to plant a million native trees in 15 countries across the globe and two major films are being released in different formats with the hopes of nudging moviegoers to live a more environmental life.

Disneynature‘s Oceans, opening in theaters nationwide April 22, showcases the beautiful creatures swimming in our seas. Audiences can marvel at their majesty while learning how pollution and over-fishing policies threaten their existence.

In the case of Avatar, hitting DVD and Blu-ray shelves the same day, the nudge is more like a shove.

It's hard to miss the environmental messages within the movie, the new box office champ that also stands as the pinnacle of modern 3D achievement. The peaceful citizens of Na'vi protect their planet-and its bountiful resources-from aggressive earthlings eager to replenish their own energy supplies.

The simultaneous release of the two films shows there's no "one size fits all" approach to spreading the word about going green, says Kristen Grimm, President of the D.C. based social change company Spitfire Strategies.

And using the clout of the local movie theater is a "powerful" way to do just that, she says.

"Stories are the best ways to deliver important messages about the environment," she says. "Whether these films include in-your-face messages or more subtle ones, movies get people talking."

If a filmmaker does his or her job, those two hours spent in a movie theater can be "life changing" for viewers, she says.

"Movies are good for making environmental issues real to people," she says. "It isn't far off. It isn't about talking heads. It is about a powerful story and one where we have an important role to play."

"Some people respond better to very blunt, direct, and in-your-face messaging," Martens says. "Others tire of having these types of messages shoved down their throat, and prefer to be introduced more subtly."

The best way for movie makers to have an impact is by releasing product like Oceans as well as Avatar, films that mix up their delivery styles.

And artists eager to spread their own views on a green lifestyle, like the Oscar-winning Cameron, who speak bluntly of their message making movies tend to generate more press, he says. That isn't always a positive.

"The downside is that they may be turning off just as many people as they are turning on," he says. "There certainly is no right answer to this question."