close
The Losers star Jeffrey Dean Morgan has hit a hot streak at an age when most actors are on the decline. 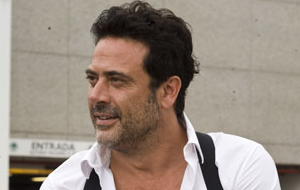 Jeffrey Dean Morgan shows there's nothing wrong with starting your acting career a little later in life. Last year, the actor starred in Zack Snyder's Watchmen. Now, he's taking on his next comic-inspired role as Clay in The Losers. He currently has five films in production, and his career is just starting at the age of 43.

Morgan isn't the first star to start his career late.

Gene Hackman didn't begin his acting career until he was nearly 30. His first big movie role came in 1967 in Bonnie and Clyde when the actor was 37, for which he was nominated for an Oscar.

Morgan Freeman wasn't credited as an actor until he was in his mid thirties in 1971 for his role in Who Says I Can't Ride a Rainbow! However, he didn't get real recognition as an actor until the late '80s with his roles in Street Smart, Driving Miss Daisy. By this time, Freeman was 50 years old.

Jeffrey Dean Morgan appears to be taking the same route. Although landing some small gigs in the '90s in such films as Undercover Heat, Morgan didn't start getting a lot of attention in movies until after his popular role as Denny Duquette on the ABC series, Grey's Anatomy in 2006. The next year, Morgan starred alongside Hillary Swank in P.S. I Love You, before landing his role in Watchmen as The Comedian in 2009.

Now, a little more than a year later, he's starring in another film based off of another graphic novel, The Losers. In The Losers, Morgan plays a marine who's part of an elite U.S. Special Forces unit. Moviegoers may experience a little bit of déjà vu.

Michelle Cornell, one of the co-administrators of jeffreydeanmorganfan.com, says it's very likely people will associate the two roles upon the film's release.

"It's possible at first they [the audience] will since it's his most popular role to date, but I also think they will get a sense of how different the character of Clay is when compared to the Comedian," says Cornell. "Clay has even more layers than The Comedian."

Caren Hamer, owner of the website, jdmorgan.info, disagrees believing the pre-press for The Losers made the distinction between the two films pretty clear, making fans able to differentiate between the two.

"Despite both being categorized as ‘comic book' movies these are two very different films with dramatically different moods and content," says Hamer. "Watchmen is a dark, moody, hard-to-watch movie full of moral ambiguity and complex philosophical themes. The Losers is a fast-paced, witty, fun, eye-popping action film that tackles some dark stuff, but does so in a pretty universally entertaining fashion. Anyone who's seen so much as a trailer for the movie shouldn't be going to the theatre expecting to see a movie like Watchmen in any but the most surface of details."

Hamer says Morgan's role in Watchmen won't influence moviegoers as much as others may want to believe.

However, playing another comic role so soon after his role in Watchmen brings concern over whether the two roles in will help or hinder Morgan's career. If successful, the star may get sucked into becoming the go-to guy for comic fans in the DC Universe.

Hamer thinks this is quite unlikely given the variety of films Morgan has starred in.

"I think Jeffrey is proving himself the go-to guy for far more than only comic films," says Hamer. "Over the past couple of years, he's played everything from romantic comedy leading man to nihilistic government assassin, and he's covered most of the bases between those two extremes, too."

Cornell agrees, saying to limit Morgan's talents into one genre would be a mistake.

"I would hate to see him pigeon-holed into one specific genre. On Grey's Anatomy [he played] the dying cardiac patient that fell in love with the doctor. On Supernatural [he played] the caring father who would stop at nothing to get revenge on the person that killed his wife," says Cornell. "It would be a shame to see that [talent] wasted by becoming typecast."

With other non-comic films in pre and post-production, Morgan is doing all that he can to not be cornered into any justice league room just yet. Hamer recalls two similar actors who also ventured into the comic realm and it didn't hurt their careers one bit.

"Just like Gene Hackman once played Lex Luthor in Superman and Morgan Freeman now portrays Lucius Fox in the Batman franchise, I think Jeffrey Dean Morgan will go wherever the best roles are, be they based on comic books or otherwise, and he'll play those characters in a memorable way no one else can or would," says Hamer.