close
A rush of strong releases early in the year makes a normally slow period feel a lot like blockbuster season.

The new film Clash of the Titans looks, sounds and practically smells like a summer blockbuster. 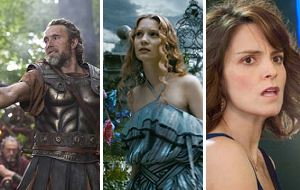 It's got a true popcorn movie vibe, from its elaborate special effects to action sequences meant to drag teen boys into theaters. And it's a remake of a popular ‘80s film, which means a built-in audience awaits.

So why is it being released April 2, a full month before the 2010 summer movie season unofficially begins with Iron Man 2?

It could be that movie studios are trying to elongate its most profitable season by a few extra weeks. Or, perhaps they understand that tent pole-style picture will draw a crowd no matter the weather.

But if Clash generates the kind of ticket sales normally associated with a summer film, will it coax studios to drop summer movies into theaters all year around? It also won't hurt that April looks very promising thanks to the presence of Kick-Ass and Date Night.

Michael D. Hurley of bigscreenbiz.com says the breakaway success of last month's Alice in Wonderland should give studios pause before jamming so many popcorn films between May and August.

"With too many movies in too narrow a time slot one good film will inevitably cannibalize another good film and both will be pushed off screens faster than they'd like by the next big film," says Hurley who owns several small movie theaters. "Alice in Wonderland grossing $300 million domestically in March is reason enough for distribution and exhibition to look to less congested months that are not inevitable train wrecks."

"The movie going public has shown they are ready and willing to buy tickets twelve months of the year," he adds, which is good news for exhibitors and distributors.

The modern movement toward IMAX and 3D films which drain more from the public's collective coffers, complicates the situation.

Ashley Dos Santos, account supervisor with Crosby-Volmer International Communications, says the movie release formula has been more or less set for a while now.

"This formula has held steady in recent decades for one main reason-it's unrealistic to expect summer blockbuster movie dollars to continue throughout the year," Dos Santos says. "Moviegoers are not going to pay $18 every weekend for the IMAX Alice in Wonderlands and Avatars of the world."

The current year has offered a surprising number of hits so far, she says, despite a sluggish economy. That bodes well for the industry, but it won't likely force Hollywood to make wholesale changes to its release approach, she says.

Hurley also doesn't expect future movie movie seasons to rapidly expand because of films like Alice or Clash. But their box office figures could alter the landscape.

"Everyone loves a crazy summer filled with big movies. That probably won't change," Hurley says. "But a little change? We could all believe in that."