close
Nash and Joel Edgerton sat down with BOXOFFICE to discuss their explosive debut, The Square 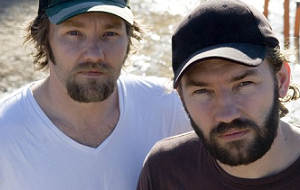 Brothers Nash and Joel Edgerton make a powerful pair. Nash is lean and athletic-he's stunt doubled for Ewan McGregor, Rhys Ifans and even his younger brother Joel. In their homeland of Australia, they're always in motion: Nash does stunts, acting and directing, Joel acts and writes. And in their very rare downtime, they produce their own short films together, bitterly funny action nastys that show two young talents who already have a unique voice. Their first feature, The Square, hits U.S. theaters this Friday. In it, two adulterers, Raymond and Carla (David Roberts and Claire van der Boom), plot to steal a bag of illegal cash from her lowlife boyfriend (Anthony Hayes). But there's no such thing as a perfect plan. And when the arsonist they hire to cover their tracks (Joel Edgerton) accidentally kills someone, their secret spins out of control. And then the anonymous blackmail letters start showing up at Ray's office. The Square is an immaculately-and mercilessly-well-crafted thriller that will put the Edgerton brothers on the map. BOXOFFICE talks to Nash and Joel about fate, family dynamics and the point where pain becomes laughter.

When you were growing up, were you always tumbling around the house?

NASH: We grew up in the Outback and had a huge backyard that we were always running around in.

JOEL: It was bushland. In the summer, it was hot and dry.

NASH: Our friends would come over-it was total freedom.

And playing around, you both learned the skills that made you want to be stuntmen?

NASH: I graduated high school a year before he did and just started working. We've always done projects.

JOEL: Always got involved in drama and all that. But we like working together.

The Square can be read in two ways: one, as karma that if you do bad things, bad things will happen. But also the opposite-that there are no plans, that everything can be derailed by the unexpected.

NASH: I do believe in karma. I do believe that what you do in life comes back around. You should be a good person, and if you're not, there's going to be payback. But at the same time, life is unpredictable. Raymond can create this whole scheme, but it's really not in his control. It's not about destiny, it's about decisions.

JOEL: He makes choices and they add up to have consequences. Every step of the way, he's taking the wrong way out and just digging himself into a hole.

Big disasters happen, but because of a series of small choices.

JOEL: That's true. In a way, you can see how it could happen. Ray just doesn't think about tomorrow. If life is a chess game, he's only thinking one move ahead-he's not prepared. He could have stood up at the beginning with Carla before things got bad and said, 'Hey look, we love each other.'

Like in a horror movie where you just want the people to stop and call the cops.

But when we first meet Carla's boyfriend, he's a scary dude who seems like he could be violent. I'd decide to run away, too.

JOEL: Yeah, what we've found is people are actually with Ray for a lot of the way. They'd do the same thing. But it changes when the money comes into it-when it turns to stealing, then people claim they wouldn't make the same mistakes.

And when those screws tighten, the love between Carla and Ray starts to fades into the background. When we see them together, they're miserable-it's almost like you're saying their love wasn't strong or true enough to survive.

NASH: When you're in trouble, love does take a back seat. When life is collapsing around you, you don't want to come home and [makes a cuddle face].

JOEL: They get together and all they can talk about is, "I can't believe we just killed someone."

For the audience, this is almost as physical and punishing for us as the characters. As things got worse and worse, I was all twisted up in my chair biting my thumbs. Joel, when you came up with a new terrible idea to make things even worse, were you just laughing and giving yourself a high five?

JOEL: I came up with the story all in one night, actually. I just found my notes-they're on two pieces on paper. It just came out. It actually used to be even worse.

NASH: There was stuff we shot that we ultimately decided we didn't want to include. We realized we should scale it back so that everything still felt realistic.

JOEL: We wanted it to feel like everything that happens could actually happen.

And it's relentless. You don't pause for comic relief.

JOEL: But a lot of audiences are laughing. To them, it is a comedy-like the short, Spider, that plays with it. It's awful and it's painful but people are laughing.

NASH: It's on that line between terrible and hilarious.

There's that relationship between pain and laughter. There's a scene here with a dog that I don't want to give it away, but when I saw it, the theater couldn't help but laugh-we didn't know what else to do.

JOEL: It's tension. And some people have to break it that way. It's interesting how people can have such totally different reactions to the same film.

You think you'll ever take your skill at pacing and shoot a full out comedy?

JOEL: We'd love to. It's definitely on our list.

How do you divvy up your projects and decide who writes and who directs?

JOEL: But I feel like when the script is written and I hand it over, it's the director's.

When there's disagreements, how do you settle them?

JOEL: It's really not too hard. I put things in his hands. Here and there, we talk things out for a little.

NASH: We're really in it together. There haven't been any issues we couldn't solve.

It never comes to brotherly fisticuffs?

The Square is unusual in that it screens with Spider, your nine-minute short. You started making shorts five years ago as calling cards for your stunt work. With YouTube, do you think the internet is setting the stage for a Renaissance of short films?

NASH: We took them to festivals, but decided that we did just want to put our shorts on the internet. It builds interest-it gets your work out there. On YouTube, Spider has gotten two to three million hits.

JOEL: If that many people bought tickets to The Square, that'd be great.

Would you advise other young filmmakers to do the same-to be less proprietary about their work and put it online?

NASH: Definitely-it's made a difference for us. Just plunge forward and do your projects and throw them out there.

Your short Lucky has these wild stunts on top of a speeding car. It reminded me of Zoe Bell in Deathproof. Are you Australian stunt people part of a posse?

NASH: We actually shot that years before Deathproof. I'm the guy on the car. But inside as the invisible driver is Tony Lynch. He plays a paramedic in Spider and Santa Claus in The Square. We've got a core group of friends in our group called Blue-Tongue.

JOEL: Spencer Susser, David Michôd. They worked with us on Square and Lucky and Spider and just brought two of their own films to Sundance [Hesher and Animal Kingdom]. We all hang out and help with each other's projects.

Nash, you were Joseph Gordon-Levitt's stunt double in Hesher. Was that you on the flaming diving board?

NASH: I gave it a go so he could see it was okay, but then for the take he did it himself. I was behind the wheel a lot when he was driving the van and getting into accidents.

How long did it take to paint all his tattoos on you?

JOEL: They were awesome. The stick figure with the gun!

Were there any we couldn't see?

And Joel, you're flying out of LA tonight to go back to work in Toronto on The Thing. Is that a reimagining? A straight homage?

It's actually a prequel. In the John Carpenter original, you hear about this Norwegian military base that first meets the alien before it attacks Kurt Russell. This is about that military base-we're telling th story of what happened first. It's got a lot of the same tone and feel as the first one, but there's definitely some influence from modern horror styles, too. We both loved the original-Kurt Russell is so awesome.