close
Oscar-nominated actor Jackie Earle Haley has built a new career for himself out of playing unsavory characters. 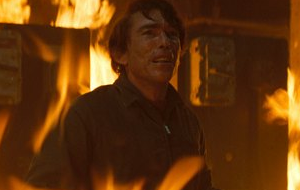 Haley, a standout in late ‘70s films like The Bad News Bears and Breaking Away, disappeared from major screen roles for more than two decades. But rather than re-emerge as tabloid fodder Haley rebounded with an Oscar-nominated performance in the 2006 film Little Children.

The role told us he had little intention of going away again.

And while he started his career as a fresh-faced teen, he now is best known for characters lingering on the edge of darkness-or worse.

His latest film casts him as Freddy Krueger in the remake of A Nightmare on Elm Street. Few actors could don Robert Englund's striped sweater so easily.

"It got a little silly. They're bringing it back to make it truly frightening again," Phillips says.

And who better than Haley to inject fresh nastiness into the nightmare killer?

"He's got the nuances, those creepy movements that make you anticipate the worst," Phillips says.

What sets Haley apart from his peers is an ability to play what Phillips calls a "more human monster." Just consider his small, but potent, performance in Shutter Island, a role that was both tragic and heartbreaking.

The irony is the actor himself doesn't appear quite so dark. Phillips met him on the set of Watchmen and found a "nice, super soft-spoken guy."

Phillips doesn't think Haley minds being cast in roles on the periphery of society.

"I think he's very comfortable with what his future will be ... he'll always be a quirky character," he says.

Jeremy Parsons, on-air correspondent for "Hollywood Dailies" on ReelzChannel, thinks Haley's disappearing act was the best thing he could have done to inject new life in his art.

"There's a whole generation of audience that has no clue who he is. That's the key to it," Parsons says.

Haley doesn't look like the shaggy haired teen actor we once saw on film. Now, he's bald and brings an intensity to every role he plays. But Parsons says his unique appearance isn't the key to his newfound success. It's all about talent.

"An actor's look is part of the equation. But it comes down to their ability to perform," Parsons says. And anyone who watched Haley steal Watchmen while wearing a mask that disguised his entire face can attest to that.

"That speaks to his deep-seated ability as an actor," he says.

If the new Nightmare proves as profitable as the original film series Haley could have a steady gig lined up for years. But playing a scarred monster also provides some curious career insurance along with it

"If the movie is a hit, then it's great for him. If it bombs, no one associates his real face with the movie," he says. "It's a safe bet. No matter which way it goes he can still keep moving [in Hollywood]."