close
INTERVIEW: The famous character actor is on fire 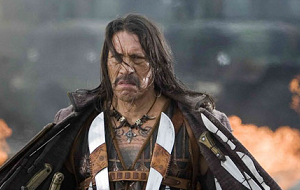 You've played a lot of killers and drug dealers. How does Cuchillo measure up?

He's a killer for the cartels and he's kidnapped by the Predators and placed on a planet to be hunted. The hunter becomes the prey. I land with two machine guns. My first look at a human being is Adrian Brody and I start screaming at him. I don't know what's going on, so it's a stand off, but then he calms me down and we go find everybody else. But I have to make my killers different. I have to find something different about them because I'm always the killer-there's got to be some little twist. This guy's a wise-cracker. There's a line where Alicia Braga says, "C'mon you guys, we have to start working as a team!" And I look around and say, "Does this look like a team-oriented group of individuals to you?" We're all basically serial killers.

I'm guessing you don't live, but is your death cool?

He gets killed pretty viciously. I can't give away too much of it, but he doesn't die easy.

You've been killed in a lot of movies. What is that like to watch yourself continually getting shot or blown to pieces?

[Laughs] I always make sure that I have a little tv set and I'm watching it from the bank.

Between Arnold Schwarzenegger and Jesse Ventura, people in Predator movies have a knack for getting elected to political positions. Any ambitions?

The state of Arizona is giving Machete a lot of free advertising.

Did you see the message I sent them!? [Growling] 'Here's a message for you, Arizona.' I think I'm going to go down there with t-shirts that say, 'You fucked with the wrong Mexican. Machete -- coming soon!'

With Machete, what was it like to be top billed over Robert De Niro?

When Robert De Niro showed up on set, he said, "Danny, this is it. This is your starring role. I know when we did Heat, you had it. You made it, dude.' I looked him right in the eyes and said, 'Can I get you some coffee, Mr. De Niro?' He is The Guy no matter what. Billing is just billing. You should see him in this movie- -- he's amazing. He plays a crooked senator and god. It's like no other character he's played. He's racist! I love watching him work.

Steven Seagal is also in it with you and I heard on set, he's always daring you to do more of your own stunts.

I got stunt guys that do my stunts!

People thought both of you were also in The Expendables, which didn't happen, though it's still on your IMDb page.

This year, you're slated to be in 16 movies. Is it hard for you to say, 'I want to take a vacation.'

I've been so blessed. I just finished a movie called Death Race 2, and I was in Cape Town, South Africa for six weeks. I worked for four weeks and I had two weeks off. That was my vacation. I sent for my kids and we had a vacation on the studio. We just hang out all over the world. We were in Austin, Texas for three weeks and that was a vacation. Working with Robert Rodriguez is just so cool. He's a real family guy. His kids were in Machete, my kids were in Machete. My two BFFs are in it -- don't put I said BFF, that's embarrassing.

Have you ever wanted to change up your look, cut your hair, but worried that you might lose roles?

[Laughs] You're not going to fix this. It's what you got. If there were 30 of us standing around, the cop's going to look at me and say, 'C'mere.' It always got me in trouble, but now it's paying off.

Here's something about you that would surprise people: this year you were in a Jonas Brothers video.

They're the cutest kids in the world! They were scared to come out of their trailer at first, but then I hollered, 'C'mon out!' and made them get pictures with me. My daughter was like, 'Can I come!? Can I come!?'

Oddly, Eric Roberts was in the video, too. You worked with him on your first movie, Runaway Train [1985].

I got hired to train him how to box -- that's how I got into the movies. I was a drug counselor. I'd never been on a movie set in my life, and one of the kids I was working with was working on the film and he called me up and said, 'Will you come hang out with me because there's a lot of drugs here and I don't want to get loaded.' I went down to hang out with him and I ran into a friend of mine, Eddie Bunker, who I'd known since 1962. Years, I'd known him -- we were in San Quentin together. He knew I used to box and he said, 'Danny, we need somebody to train Eric Roberts how to box.' I said, 'What's it pay?' and he said $320 a day. I said, 'How bad do you want this guy beat up?!' And he was like, no, no, no, I've got to be real careful because Roberts was high-strung and might sock me. For $320 a day, give him a stick! This Mexican's been beaten up for free! I started training Eric Roberts how to box and the director, Andrei Konchalovsky, saw me and said the contrast between me and Eric was really good and that I should be in the movie. That's how I got started.

And 25 years later, you're both getting screamed at by Jonas Brothers fans...

Did you ever worry you were perpetuating stereotypes?

[Laughs] Sweetheart, look at my picture. You can't stereotype me -- I am what I am. When you look at me, you think this guy's either going to be the bad guy or the bad guy gone good. But we're going to start off with the bad guy.

If you could only keep one of your 185 movies, which would you pick?

I would have to say Heat. Robert De Niro, Al Pacino, Val Kilmer. But! Machete. Wow. It's so over the top. With what's going on with Arizona Machete is a political statement that's just going to piss everybody off.

And you get to make out with Jessica Alba.

Wow. I kissed her and then three of my best friends tried to kiss me. "You kissed her! You kissed her! Her lips are still on you!" She is amazing. God worked overtime on her. She and Michelle Rodriguez are my two love interests. Can you imagine? I died and went to heaven! Michelle Rodriguez is go-to-hell beautiful. The first time I saw her, I was like 'Damn!' She came up and said, 'Danny, I'm a big fan of yours.' I looked at her and said, 'I'm going to be a big fan of yours for the rest of my life, lady.' All of us used to go out dancing and we just had a blast. They were surprised because I can salsa, I can swing, I can do them all. I can do the cha-cha. They'd ask, 'Where did you learn that?!' C'mon, I'm Mexican! I was dancing like this in the '50s!

You were born in LA's Echo Park and are still really active in community outreach.

I was born on Temple St. right around the corner. I moved to Pacoima when I was 13. I work for a place called Western Pacific Med/Corp and we work with detoxing and maintaining drug addicts. We have ten clinics throughout Los Angeles. The budget cut just took away everybody's medication, so if that passes, the very next day people are without their medication. It's like taking chemo away from cancer patients! The only problem is drug addicts will have to go get their medication, and they'll do it by any ways and means that they can.

And Home Boy Industries is having to lay off a lot of their people.

And those people will go back to gang-banging. They're not thinking. If this cut goes through, the amount of money that will be spent on crime-fighting and emergency rooms -- the wave that's coming is crazy. Something's got to been done.

Three decades after Ronald Reagan kicked people out of mental institutions, that move is still being blamed for things like that woman stabbing four people last month at the Hollywood Target. These things have ripple effects.

We've got to do something else. Why don't we start taxing Big Business? Let's cut prison costs. A prison guard makes more than a teacher. Let's switch that around and then maybe some of those kids wouldn't be going to prison. I might run for office. But I could never be in office because I'd go straight after Big Business and say, 'Look, you guys are very, very rich. There's nothing wrong with being rich. I'm going to make sure you guys stay rich. But you are going to pay your fair share. You're going to support this, this and this.' People are afraid to attack stuff like the prison unions. It's the prison unions who put Arnold in office. Those guys got the most money so they have the biggest lobbyists.

And how teachers unions prevent kids from getting better teachers.

We've got teachers who are just struggling to take care of our kids. It's not supposed to be like that. We should have teachers, teachers' aides. We should make the teaching business so lucrative that teachers are dying to get in. But the problem is you can be a teacher, but you have to have another job.

And it operates on seniority so bad teachers stay on forever and keep squeezing out the young idealists out of college who still think they can make a difference.

A lot of them are going to private schools. Hey, this is great, hon! We outta run for office on the same ticket.

I will totally be your running mate. We're both LA-based.

I'm in the San Fernando Valley because I had to get a house close to my mom. She's getting a little older. I said, 'Momma, you want to live with me?' She said, 'No, no mijo-you're out too late!' When I'm gone, all of my camaradas stop by her house and one time, one of her neighbors called the cops. "They're Danny's friends! They're okay!' They sat down and had coffee. Hey, how does this sound? I'm going to go across the street to the Capitol right now. I'm going to Arizona to pass out t-shirts in two weeks, I'll just start now. There has to be immigration. The only problem is you don't take away people's constitutional rights. You can't stop somebody for being Mexican just like you can't stop somebody for being black. You have to have a reason to make somebody show you their papers. I'm going across to the Capitol right now.