Emmanuel Laurent Talks 'Two in the Wave,' A New Doc About Godard/Truffaut 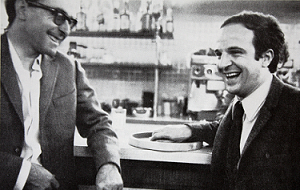 The coinciding careers of Nouvelle Vague giants Jean-Luc Godard and François Truffaut are the subjects of filmmaker Emmanuel Laurent's first feature Two in the Wave. A tapestry of articles, interviews and archival footage, Two in the Wave tells of the trajectory of the Cahiers critics' careers and how their debut efforts The 400 Blows (Truffaut, 1959) and Breathless (Godard, 1960) changed the face of international cinema. But rather than focus merely on their artistic accomplishments, Mr. Laurent's piece acts as an exegesis on the pair's personal lives, dutifully detailing their friendship and falling out. Though intermittently cohered by a narrative that features a young woman (Isild Le Besco) reading and researching the two over time, Mr. Laurent, for the most part, allows Truffaut and Godard to talk for themselves--a wise decision, as neither were ever short on words, especially in regard to each other.

Mr. Laurent agreed to do some talking of his own to BOXOFFICE and had this to say about his movie, his inspirations and those feisty young Frenchmen who forever changed film.

Your approach for Two in the Wave, while seemingly unbiased, appears to be more stylistically and narratively akin to Truffaut's work than Godard's--do you have a preference between the two filmmakers in regard to how they approached cinema? Also, in terms of your own work as a director, which have you learned more from?

I'm impressed you could read this in my film. The answer is yes, I'm personnaly more inclined to Truffaut's work than Godard's. But I sincerely admire the latter's talent, even if I don't like the man (he's an amazing editor, which was my long-time job in the industry and I still think of myself as an editor). I have always been more personally and intimately touched by Truffaut's work. He was speaking my language, speaking directly to my senses. Jean Pierre Léaud was me on screen, in Truffaut more than his character is in Godard's movies. I love for instance Truffaut's letter on Matisse, which we choose for the film, to counter-balance Godard's radical political statements (otherwise poeple would lean toward the revolutionary Godard, as they always do: it's more glamorous). Godard's attitude in politics has always sounded archetypically bourgeois to me, in the way he sees the working class, when Truffaut didn't fantasize on it, being one of them, or nearly. Their voices--which they both use a lot in their films--might be a good way to make clearer my relation with them. Truffaut's voice has a sort of vibration, an urgency and warm intelligence that resonates in me for some reasons I find hard to explain: because it's him and because it's me, I guess. Godard's voice, although very personnal and emotional, doesn't work that way at all for me: I find him funny. Godard sometimes makes me think, but I'm not moved by him (although amazed by his guts and sense of provocation).

The two, while even complimentary of each other, made very different films, even early in their careers. Do you feel there were any early clues, be it in their ideologies or in their works, that their friendship would eventually end? Or even that their careers would go such separate ways?

The love of cinema brought them together.

Godard and Truffaut both had to solve their respective family problems, in very different ways. Godard had a very happy, outdoor sport's life with lively siblings and loving well educated and wealthy parents, when it was quite the opposite for Truffaut, sad, urban, lonely and poor, with the exception of his loving grandmother. Truffaut, in The 400 Blows, settled the dire issues with his parents (and more specifically his mother) once and for all (in the following Antoine Doinel movies, it's more a game and it's not bitter anymore, but funny). Godard never mentions anything related to his past, and less about his family, as if it had never existed. It's only very recently and in a very cryptic way that he started to introduce his own memories from his youth into his films, through settings of the Geneva lake for instance and the house at which he spent the summers mentioned above (in our film, it's actually the first time ever that he's seen young, as a boy, n photos). So, Godard never redeemed himself of being rich, and it's not only with Truffaut that he parted, but basically with everybody he knew who didn't turn Maoist after 1968. Their social origin explains certainly a lot the difference between their films, one being as sincere and honest with it as one can be, taking the bull by the horns, the other one fleeing from it. Godard, who stole everything from Truffaut (stories, ideas, Histoire d'eau and Breathless, and more significantly Jean Pierre Léaud) could never forgive him to have launched his career as he could never forgive his parents to have launched his life. I'm not a big fan of psycho-analysis, but there might be some truth in there.

Is there a back story to, or inspiration for, the Isild Le Besco character?

She was to be in Godard's "next" film in 2007. At least he called her to ask her to be in his next movie, at the time when we were thinking of making the film, [Two in the Wave writer] Antoine de Baecque and me, and we thought she would be a great link, the last link in a chain of women that are at the heart of New Wave films. It didn't happened with Godard, but it did with us. She has a very inspiring face and she's a daring independent filmmaker herself. How could I resist the idea?

Could cinema possibly be saved, if you will, by a newer wave of critically minded, perhaps even experienced, filmmakers? Furthermore, do you think cinema today needs saving?

Each era has to find its own aesthetic and cannot replicate what has been done in the past: it doesn't work, we know it. The aesthetic of our time will raise somewhere, one day, either through an individual or a group, as it happens in painting for instance, or literature. If it doesn't it will mean that our time did not really exist and will be in any case forgotten by the future generations, buried in the sand of history. It's probably important to be a well structured group, who shares the same ideas, to be strong enough against the enemy: it'll allow the group to deliver a long trench war. It's always amazing to see how prolific each member of the New Wave group was, and it's a sign that they formed a coherent group (in addition to the fact that liked the same films and filmmakers, generally speaking). They all filmed until their last breath, inexhaustible, making a film each year, sometimes even more. There must be a reason for that. I think it's because they thought about cinema as modern painters would, and did not think about cinema as scriptwriters would. It's important to remember that they forged the concept of "auteur," the auteur being the "metteur en scène", not the scriptwriter (as oppose to today, where the scriptwriter somewhat regained its former position). Like the modern painters, the New Wave auteurs just needed to be caught by a motif, and that was it, they filled their canvas. They didn't mind at all if someone had used the same story before, and in actual fact it's exactly the opposite: it spurred them to show their own way of filming that same story. See how Godard with Une Femme Mariée (A Married Woman) replies to Truffaut's La Peau Douce (The Soft Skin), dealing each in their own ways with adultery (when they both are young husbands), Godard making his own film six months after Truffaut's, or Une Femme est une Femme (A Woman is a Woman) replying to Jules and Jim (two Ménage à Trois films), or Vivre sa Vie (My Life to Live) and Shoot the Piano Player, two gangster movies, etc. Filming as you breath, capturing the life around you as sincerely as you can. Who does that today? After digesting thousands of films, that moto of the New Wave is still valid for filmmakers, and the tools of our time being as light and cheap as they have ever been, it should allow even more freedom than the Nagra and handheld camera did in the '60s. Internet will be the medium, allowing to pass over the head of the people "who know how to make films," the new academy. It must be fun too. As Truffaut said: "Filmmaking is the most beautiful job in the world, and I get paid to do it."

Two in the Wave is currently playing through June 1 at New York's Film Forum.