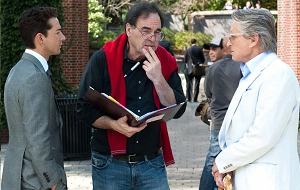 The financial sector meltdown had one benefit: it played a major role in convincing Michael Douglas, Oliver Stone and producer Ed Pressman and an impressive ensemble cast that the time was right to proceed with Wall Street: Money Never Sleeps more than two decades after the debut of the iconic original.

Screened to generally positive vibes before the critical mass at the Cannes Film Festival today (Friday) director Oliver Stone who backed away when the idea initially was mooted said that the script changes in the light of the current straitened circumstances made it a compelling proposition.

"I realised that the 1987 film was an obvious bookend to this. We thought it was over, the history of all that greed. We thought it would balance out, and there would be a correction. But there was no correction. The pendulum kept going one way and it got bigger and bigger.

"I am confused whether capitalism can work, but it seems not, given its excesses and the fact that it is unregulated. There are tremendous issues world wide, in countries such as Greece, England, and Spain. In 1987 we all got drunk and I thought the system would sort itself out but it did not and it got worse. Productivity went up, leaving a tremendous gap between stockholders and CEOs who made money and the working people who did not.

"I would not have wanted to it as atraditional sequel but here we have Gordon Gekko at the bottom of the pile and just out of prison and he takes on a new protégé in Shia LaBeouf's character."

Michael Douglas reflected ruefully on the way Gekko became a role model for some of the banking world aspirants rather than a warning. "People are attracted to villains but we never ever anticipated that people in business school would hold him up as the person they wanted to be. The greed has not stopped - it has got legal."

Asked if delaying the films release until September might take the edge off its immediacy Stone opined: "The danger is if you chase the news you are never going to be satisfied. The news will go on for the rest of the year, and there may be storm brewing in the autumn which could work in our favour."

Stone declared himself content that the film is screening here out of competition rather than in the race for the Palme d'Or. "Competition can make you crazy and it becomes a sort of a drug. Woody Allen made the point that competition drives people crazy [Allen's You Will Meet A Tall Dark Stranger also shows out of competition tomorrow Saturday). We all learn from each other, and we steal from things even from the bad movies, and it becomes this bouillabaisse."

Douglas said he was not clear if Hollywood has been directly affected by the financial crisis but he bemoaned the disparity between studio movies on budgets of 70 million dollars with publicity spending of between 30 to 40 million dollars and independent films that are down to spends of 12 or 15 million dollars. Foreign countries seem to have money to distribute and market American independent movies but we cannot seem to be able to the same for them in America - I have never understood this."

Shia LaBeouf as the young protegé dabbled on the stock market as a way of researching his role. "I had made five action films, and was known as the Transformers kid. The only way to have confidence was to be astute as I could and these men in the City embraced me and I learned a lot very quickly. It made it easier for me to play the part and I did very well with the stocks, not because of my intellect but because I entered the market at the time the crisis was going on."