close
INTERVIEW: The comedic actor discusses the reunion of his Saturday Night Live pals in this summer's new comedy

Rob Schneider Hangs Out with a Bunch of 'Grown Ups' 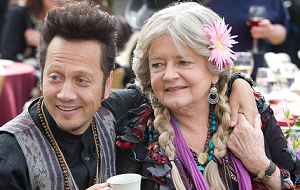 In Grown-Ups, you play Rob, one of five friends reuniting after years-which is basically the on-set truth as you've been friends with nearly everyone in the cast for decades.

Did you have to haze him?

Every time we bring it up, it's like he's been hazed. But it's funny-he's a solid guy. He should have been on the show. He would have been great. But the shoot was like a reunion. We're all getting older. I don't know if it will ever happen again?

Tell me about your character: Rob.

The thing about the movie is over the 30 years they've known each other, some people have been more successful, and some people have been less successful. And some people have been been successful in business but unsuccessful in their home lives, or the opposite. Who's got what? I play a character who's been married a few times. He hasn't been able to commit. So he's gone the other way: instead of marrying young women, he's married a very old lady. I guess it's less of a commitment because he doesn't know how long she's going to be around. Some of the stuff is based on me, I guess. He's a health nut with some anger issues. But that's how Adam and Fred Wold wrote him.

Do you and David Spade ever lobby to get super hot wives? You're always left out.

It's because Adam wrote it for himself! Of course he has himself married to Salma Hayek, and me married to a 75-year-old. That's Adam.

When you've done so many movies with the same people, do you ever have a moment on set where you're scrambled? Is it hard to keep the scenes straight?

No. As far as keeping my face straight, yes. That's a problem because these are some seriously funny guys. We've all been around a while, so there's not that pressure to always score. With five funny guys, it's tough. But it doesn't feel like the pressure we had when we first started. David Spade is particularly funny. In real life hanging around with these guys, somebody's always got something funny to say.

You were born on Halloween: Was that a birthday killer or did it give you the best birthday party ever?

Oh, it was the best! Everybody dressed up and my parents said, 'It's all for you, Robby.' They were trying to create a monster out of me. I later realized it wasn't, but since there was always a big party, always everyone in costume, my childhood was a lot of fun.

Do you still feel a pressure to have the best costume ever? Who were you this year?

The Dog Whisperer. Oscar What's-his-face. [In accent] I dress up like heem, talk like heem. 'Dees dogs here! Dey don't have a problem. He's-a good. You just haf to communicate with your dog. That's how he wants it, and when you pet-a heem, he's gonna do it 'cause he jus wants to please you.'

Some people have taken offense at your accents, but you have a diverse background. Your mom was Catholic, your dad was Jewish, your grandmother was Filipino.

I don't care if they take offense to it. That doesn't bother me. Peter Sellers played an East Indian pretty well-The Party was really funny. Alec Guinness can play an Arab in Lawrence of Arabia. Marlon Brando played a pretty good Sicilian in The Godfather. The idea that we're not allowed to play other ethnicities is just a bunch of crap. I played a woman in a movie [The Hot Chick] and no matter what the reviews said, not one critic said they didn't believe me as a woman. I think if you're gay, you can play straight. If you're straight, you can play gay. Anything that's part of the human experience, you can play. I refuse to be limited by my looks, or by my size or by my whatever. People always need to bitch about something.

Do you think the comedy world has gotten more sensitive since you started doing stand-up in the '80s?

Nah, I don't think so. Comedy is not a line in the sand. It ebbs and flows. You just hope you're ebbing while the audience is flowing. But I think with the economy and people being broke, people want to laugh more. If you take a look at the box office, it reflects that.

You're also outspoken on environmental and educational issues.

We spend more money on prison space than we do on classroom space. We have to ask ourselves: what kind of society are we building here? We have for-profit prisons. Next to China, we have the highest per-capita amount of people in prison. It's ridiculous. Next to China-an authoritarian military dictatorship. And we have more in common with them than we do with Europe, as far as how we imprison people, mostly for stupid drug offenses. As far as our schools, we're not even in the top ten in the world. We're in the 20s or 30s. What do you want to spend your money on? Our teachers need to have a tax-free status. If we don't have the money to pay them as much as they deserve, then if you're a teacher, you don't pay taxes. If we really value our teachers, we should show we value them with a special status. But then the firemen and the policemen are gonna say, 'Well, how about us?' Well, I'm sorry, but teachers don't make as much as you. We don't have a fireman and policeman problem. We have a teaching problem.

Most other comedians and actors aren't as comfortable speaking their minds on political topics-do you try to encourage your friends to take a stand on issues that matter to them?

Yeah, but I'm doing stand up again because Chris Rock and Adam Sandler talked me into doing it again. So I can talk about it to people. But at the end of the day, people have to do what they want. I think it's important for people to be knowledgeable. You're going to have to make tougher decisions now for our country because we're literally bankrupt. That whole stimulus package-$750 billion-was from China. That's how bad it is. They're buying our treasury bills every month to keep the government afloat, and we're going deeper and deeper in debt. If you don't think that's going to affect things-it is. We can no longer spend $700 billion a year on the military and be the world's only superpower. We're broke. This cannot maintain. We can't take care of our roads, our schools, the health of our people. Something's got to change.

Is there a classic movie you'd like to redo?

Local Hero with Burt Lancaster and Peter Riegart. Love it.

You have a 20-year-old daughter. Did you raise her to have great taste in movies?

Cinema Paradiso. That movie has a real love of film. Some movies are just beautiful. Strictly Ballroom is great; it's before Baz Lurhmann got too pretentious.

Cinema Paradiso was a favorite for me and my dad.

I was touched when you sent flowers to Roger Ebert when he got his cancer diagnosis.

I didn't do it for publicity. The only reason anyone found out was because he said something nice about it on his blog. I don't know how many people whose careers he's helped, and I don't know how many of them sent him flowers. But they should have because he's been a really positive influence on so many people's careers. Not mine, but I wish him well. He influenced me-I discovered foreign films because of him and Gene Siskel. I wish him well. He's an American institution.