close
FEATURE: The new version of a classic tale hits theaters in North America this Friday 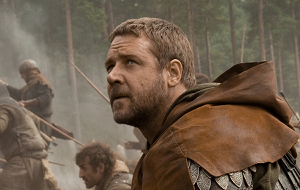 Sir Ridley Scott, to give him his full regal title, missed out on the glitz and glamour of the Cannes Film Festival where his bows and arrows epic Robin Hood opened the Riviera jamboree last night (Wednesday) in the presence of Cate Blanchett and Russell Crowe.

The 72-year-old Brit was laid low after a knee operation which has not healed as quickly as he had hoped. He sent a message of support from his Los Angeles home to his "team" who also included producer Brian Grazer to say that he was happy that Robin (Crowe) and Maid Marion (Blanchett) were on hand to defend the film which opens simultaneously with its Cannes out of competition slot in various territories world-wide.

Crowe, 46, in wise-cracking form and wearing sun glasses, open-neck shirt, and charcoal jacket was lightly bearded and did not look too far removed from his muscular screen incarnation. A blonde Blanchett by contrast was a vision in pink silk and very far removed from her muddy and dischevelled folk heroine.

Crowe said he felt as if "strangely there is an element of Robin lying in the heart of all of us. If our world was to go pear shaped we would hope someone would stand up and redress the balance. Would his aim be political and bring certain figures down? Or would he realise that the true wealth lies in the dissemination of information and he would be looking at the monopolisation of media as the main enemy?"

Blanchett, 40, did not want her Marion to be in the mould of previous screen incarnations such as those played by Olivia De Havilland and Audrey Hepburn. "Actually," she said smirking, "I would love to have played Robin but Ridley would not wear it. You have to deal with the green tights syndrome and find the right aesthetic."

Robin Hood is Scott's fifth film with Crowe who also received a credit as a producer. The script went through many machinations over a period of time since it was first mooted. "We wanted to get away from the tongue in cheek versions essayed by Errol Flynn, Kevin Costner and Mel Brooks," said Crowe defiantly. "We took a very arrogant perspective which you have to if it is a story that has been told so many times. And I think it helped that we are both Australians." His co-star could only concur.