close
Tweet counts and analysis for Wednesday, May 12th.

Wednesday Night Update: With the final update of the day Robin Hood ended at an even 10% market share for the day, or 4,054 tweets. Yes it was really boosted by all the Cannes news but impressive nonetheless. The other latebreaking story is the news that a clip for The Twilight Saga: Eclipse will debut on Apple Trailers tomorrow and the anticipation for that alone led the film to end the day at 4,292 tweets or 10.5% market share. This is a sizeable jump from Tuesday's 2,870 tweets and 7.09% market share. Tomorrow should be pretty hectic for it on Twitter and I wouldn't be surprised to see it rise up to take the top spot by a ways.

Wednesday Afternoon Update: Robin Hood has surged today, presumably due to its appearance at Cannes. It has expanded to 2653 tweets already today and now owns 9.7% market share. Considering it had ~1,600 tweets for all of yesterday and 4.1% market share this is a pretty massive jump. Letters to Juliet has also seen a decent jump today so far, going from 1.77% market share yesterday to 3.80% so far today. These two films are the only to show more than a 2% positive swing in market share between yesterday and today so far.

Letters to Juliet dipped on Tuesday to 718 tweets, but that actually accounted for a rise to 1.8% market share, up from 1.5% the day before thanks to a contraction of the overall total. Its tweet quality continued to be the best of the new openers but it did fall off somewhat from yesterday as it came in at 30.92% positive (222 tweets) and 6.41% negative (46 tweets). Taking into consideration that its Monday tweet totals and ratings were bumped by the Sunday sneak peaks it made sense for things to level off a bit on Tuesday since it was another day removed. By comparison, Dear John had 3,178 tweets its Tuesday before release. This drop on Tuesday might make it difficult for the film to hit my target of 4,500 for the week which should impact its potential. Wednesday's number will make it much firmer but as it stands right now $5 - $5.5 million on Friday appears to be its upper limit.

Again Robin Hood led all three openers with 1,678 tweets, up from 1,376 tweets the previous day. This led to 4.1% market share, up from 2.7% on Monday. In terms of tweet quality it dropped 4 points to 25.92% positive (435 tweets) and 7.75% negative (130 tweets). A decent showing but not overwhelming and the drop of 4% for positive tweets might signal the start of a trend here which would not help its opening weekend. The very modest increase in total tweets from Monday to Tuesday was not uncommon for films targeting older audiences but it will have to turn on the gas on Wednesday and come in north of 2,200 if it has any shot of reaching my predicted 8,500 for the week. In looking at other relevant films: 2012 had 2,864 tweets its Tuesday before release, Avatar had 5,100 and The Book Of Eli had 1,094. So long as it can hit the mid 8,000s I believe a $13-$14 million Friday is possible.

Check back tomorrow to see the Wednesday numbers and the offical BoxOffice.com weekend predictions. Follow @AlexBOXOFFICE on Twitter for additional updates. 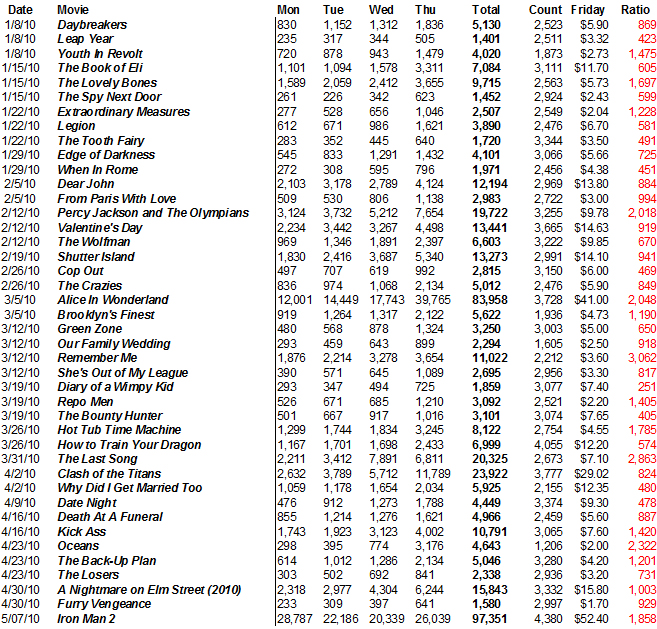