close
Tweet counts and analysis for Tuesday, May 25th.

Tuesday Afternoon Update: Sex and the City 2 is blazing up the ranks on Twitter, so far accounting for 9,282 tweets as of 12PM PST, or 26.9% market share, up from 16.5% for yesterday. The premiere of the film is a hot subject of debate as well as just general chatter of women excited to go see it this weekend. Prince of Persia: The Sands of Time actually has slightly more tweets this time today than yesterday with 3,780, but thanks to the explosion of Sex and the City 2, its market share has actually dropped slightly from 11.2% to 11%. Not a great sign. In other news, the Oprah appearance of Julia Roberts to promote Eat, Pray, Love has pushed it into the top 5 upcoming films for the day and 3.5% market share. 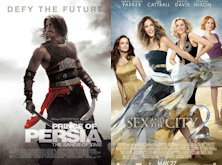 Tuesday Morning Update: Sex and the City 2 started the week with a proverbial bang and 6,844 tweets, for a market share of 16.5%, up from 7.09% yesterday. Its positive percentage was 22.31%, while its negative percentage was 6.46%. Altogether these are some pretty impressive numbers which should set it on a trajectory for ~25,000 tweets this week. Since this is the first Memorial Day holiday I'm using Twitter to analyze and also the fact that it is a Thursday release this will be more tricky than normal to peg. In terms of comparisons, Dear John had 2,103 on its Monday before release, The Last Song had 2,211 and Letters To Juliet had 784. A Thursday ratio of 1,000 should be in store which should allow for an opening day in the lower to mid $20 millions.

Prince of Persia: The Sands of Time saw 4,627 tweets on Monday, for a market share of 11.2%, up from 8.65% yesterday. Its tweet quality was slightly below Sex and the City 2, with 21.83% positive and 8.00% negative. In terms of comparisons, I still believe Iron Man 2 to be the best and that had 28,787 tweets its Monday before release. Overall a very solid performance here by the film, though its negative percentage was a little on the high side and might pose an issue if it creeps up over the week. With this Monday number in the bag a week total in the region of 25,000 - 30,000 should be in order (since this doesn't get released till Friday it has an extra day to gather tweets). A ratio of ~1,750 should be in order which will allow it to climb to mid to high teens on opening day.

Check back later today for an updated snapshot of key movers and tomorrow to see the final Tuesday numbers. Follow @AlexBOXOFFICE on Twitter for additional updates.

Tags: Sex and the City 2, Prince of Persia: The Sands of Time, Eat Pray Love
Print